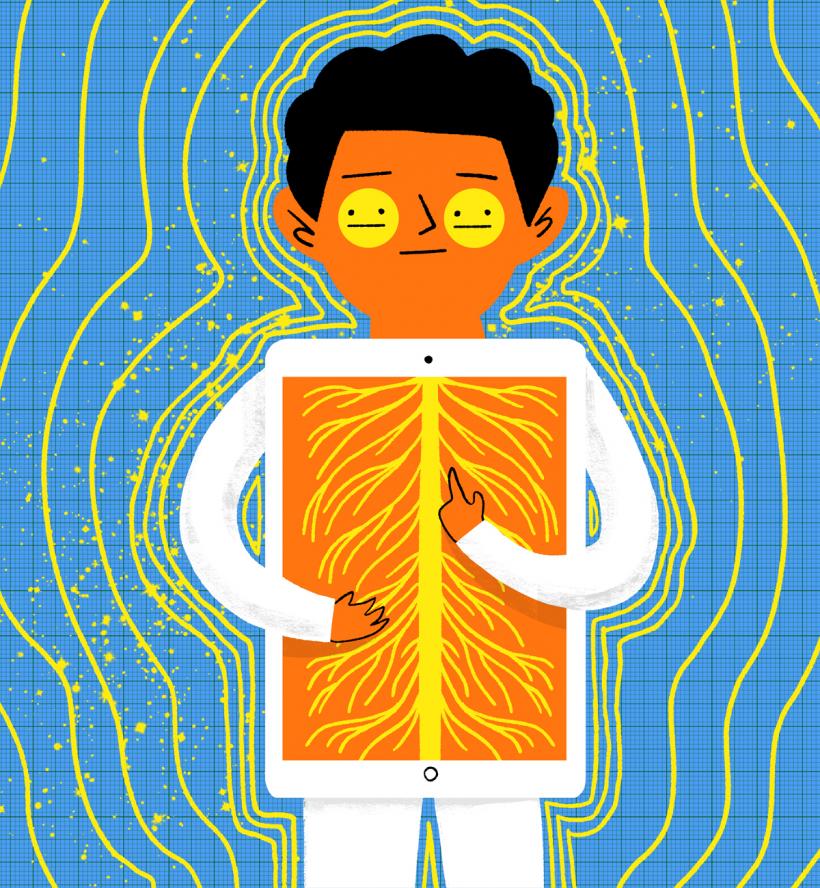 Why is my child so short-tempered? So ill-behaved? Why, even after a full night’s sleep, is my child still cranky, hard to motivate to get ready in the morning?

Could these be the reason for your child’s profound (or even mild) behavioral issues?

It’s not a fun thing to think about, but it’s true.

The other day, while shopping in downtown Santa Cruz, I watched a woman cradling her phone, deep in what must have been a very important series of Snapchat stories/texts/episode of The Gilmore Girls, walk into a parking meter. To be fair to the woman, the meter was a bit below eye level but, to be fair to the meter, it was bright — almost neon — green. I’m not trying to make this woman feel like to fool she looked (sorry woman if you are reading but I did laugh) — I once walked right into a very visible oak tree shopping for flannel shirts at the Gap — I’m just saying that’s a lot of interest in a phone.

Handheld screens were not a thing when I was a child — the best I could do was a black and white TV and one of those old fishing or ring-toss games that you filled with water and tried (and mostly failed) to achieve whatever the completely ridiculous goal of the game was. Handheld games were barely a thing when my older kids (now 23, 20, and 18) were small. But my two younger children are living in a completely different media culture.

We never set out to spoil them with devices, but somehow they each ended up with a Samsung tablet (freebies from AT&T), a shared iPad (my old one), an iPhone 6S (their dad’s old one), and a handheld old-school throwback Atari game. Besides all of that, we have (what seems to me) an enormous television that has such stunning detail that you can see the flaws that makeup artists are hired to cover.

While my older kids were growing up, people used to talk about how TV shouldn’t be the babysitter and some of us more independently thinking moms would reply “Isn’t that the point of TV?” So they, and most of their friends if I remember right (except for this one ultra-conservative Mormon family that didn’t even HAVE a TV) watched a fair amount of TV and, while it may have stunted their brain development, it never really seemed to impact their behavior.

But something has fundamentally shifted. The screens are smaller and more interactive. The shows are busier, noisier, brighter. Things move more quickly, and in a matter of a few seconds, you can bounce from YouTube to Netflix to Hulu or from an episode you’ve already seen to the next and the next and so on.

And science agrees. Especially for kids with Autism or other spectrum disorders or kids who already have other sensory processing issues, screen time may be exacerbating their difficult behaviors. Scientists have started calling this Electronic Screen Syndrome.

When screens became our sole bargaining tool (get dressed, finish your chores before screen time) and we saw the meltdown they caused, we took them away cold turkey. Not surprisingly, our kids freaked out. I’m not saying TV is heroin; I’m just saying that these kids were losing their minds for their next fix.

The first few days without screens at all were really rough.

TV time was how we slept in on the weekend until seven (our kids are usually up by six). Handhelds were how I got work done during the day. Screens were how we often motivated the kids to complete tasks. Without screens as leverage, we didn’t seem to have much.

But after that first weekend, things got better. There were fewer tantrums, fewer incidents of bickering. The irony here, of course, is that with the TV on, they wouldn’t bicker either. But then once the TV went off, it was like they were activated for stimulation seeking — wherever they could get it. Fighting with each other. Fighting with us. It seemed to impact our daughter more than our son, which makes sense as she has severe anxiety and Selective Mutism.

We spoke with our Talk Doctor about this (the therapist I take our seven-year-old to see), and she confirmed what I guess I already knew. The firing of the dopamine gives kids such a high they keep on looking for it when the screen is gone. Either consciously or subconsciously, they are looking for that high.

After a couple of weeks with no screens at all, we reintroduced the television with okay results. But as it happens, we started to let them have more and more TV time (because it’s easier that way) until we were back up to what seemed to be the tipping point of TV = tantrum. It’s astounding to me how quickly the changes occurred. A child’s brain is a sensitive thing.

But what about the parents that rely on screens? We’ve talked before about not shaming parents for screentime (especially in public) which is a real and valid concern.

Some parents don’t have other options. Either time or money means they rely on the use of screens as virtual babysitters, electronic peacekeepers. And I get that. I really, really understand that.  But I can’t help but think that maybe the kids who we believe need screens the most — the neurodivergent ones — might actually be harmed by their overuse.

As painful as it is to consider it, it turned out to be true in our home. Taking screens away was no easy feat, especially for the kid who we so often need a break from, but I didn’t become a parent to take the path of least resistance. This is hard, but isn’t it all?

Is your child at risk for Electron Screen Syndrome? Here is a quiz that may help you determine it.