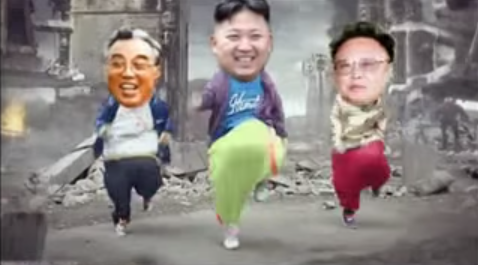 North Korea’s pretty short on allies these days, with China begrudgingly acting as its main arbiter. But even China seems to have little respect for the Hermit Kingdom and its humorless leaders.

In this bit of remedial Photoshop trickery, a Chinese Youtuber plasters Kim Jong Un’s face on a whole litany of other viral footage. He runs! He fights! He rides a pig! But most of all, he dances. Oh, how he dances!

Various other world leaders make their own face-pasted cameos in the video, especially our very own President Obama—who typically plays the foil to Kim Jong’s antics. To round out the vision, all the joy is set to Chinese pop track, “Chopstick Brothers.”

Best of all, the video has elicited a response from the government in Pyongyang, which denounced how it “seriously compromises Kim’s dignity and authority.” And that’s when you know your satirical video has really made it in the world. So enjoy Kim’s jubilance in movement—it's as rare and beautiful as a unicorn.