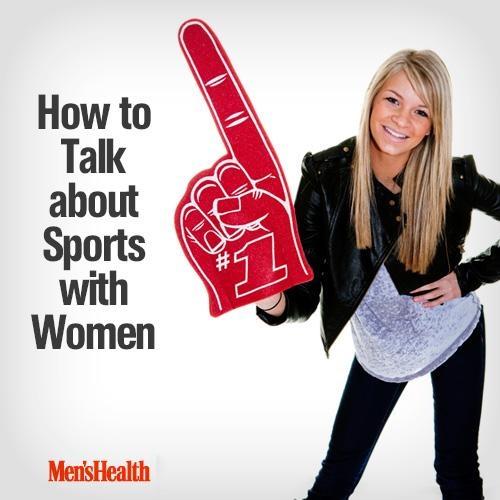 Yesterday, Men's Health magazine tweeted out a, shall we say, regrettable article. Its title? "How to Talk about Sports with Women." Its photo? A sexy young blonde who, like, clearly doesn't, like, care much about sports.

So, to be clear, according to Men's Health, women are bimbos who need to be talked to in "special" ways about the big bad world of sports. And if you'll allow us to get a little click-baity for a second, what happened next will shock you.

Though the Internet is often an unkind place, Twitter users-many of them prominent writers and editors-wasted no time in mocking Men's Health for its obviously backwards editorial judgment on a piece that somehow made it all the way from pitch to page. The result: The magazine quickly deleted the article and issued a mea culpa.

Apologies for our "talk sports with her" story. It missed the mark and the negative feedback is justified. We've deleted it. [part 1] - Men's Health Mag (@MensHealthMag) October 7, 2014

Hey everyone, do you realize what just happened? Twitter WORKED! This is what the Internet is supposed to do!

Though Men's Health tried to make amends, we-and the Internet-won't be forgetting the bone-headed transgression anytime soon. And really . . . why should we? Let's be honest here-part II of the magazine's apology carries shades of a patronizing "I'm sorry if you're offended" attitude, and also IT SHOULDN'T HAVE EVEN PUBLISHED THE ARTICLE IN THE FIRST PLACE.

In the spirit of not letting the mag off the hook just yet, here are some of our favorite funny, smart or just plain real responses to the "How to Talk to Women About Sports" headline lambasted 'round the world.

Excuse me @MensHealthMag, can you provide some stats to back up your claim? Also please send a man to explain them to me. A hot one. Thanks. - Elika Sadeghi (@steakNstiffarms)

Men's Health has deleted its 'How to Talk About Sports With Women' article. No word yet on 'Women Can Drive Cars, Apparently' - Scott Stinson (@scott_stinson)

I would've said that the secret to talking about sports with a woman is treating her like a normal adult human but WHAT DO I KNOW. - Caitlin Kelly (@atotalmonet)

hi @MensHealthMag, you don't know me, but i run @ESPNMag's annual analytics issue. also, i have a vagina! - Megan Greenwell (@megreenwell)

I normally don't believe that trolling for hate clicks is a thing, but there's no other way to explain that Men's Health thing. - Matt Yglesias (@mattyglesias)

Greg was right about women seeing sports differently than men. I watch the game while my husband naps on the couch. @roncorning #MensHealth - Shelby Bardo (@MrsShelbyBardo)

@RealMattlanta my first sports memory was with my mom. Men's health is full of it. #womenknowsports - Matt Scroggs (@matt_scroggsVFL)

Step 1 @MensHealthMag? Know that bc we deal w crap like this & still love sports, our passion likely outmatches yours - Stephanie Haberman (@StephLauren)