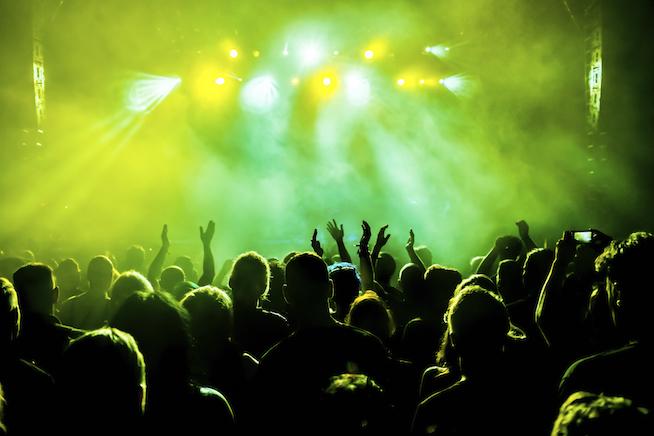 I don’t even know what he looked like. I was so focused on not making eye contact that I didn’t get a good look at him.

His hand is over my ass now. I should do something. Why am I not doing anything?

OK, here we go. Time to awkwardly stand by myself and try to look cool for three hours.

Thank god for smart phones. How did music reviewers look cool in crowds before smart phones? I’ll just stand here and idly text people totally unnecessary life updates so it looks like I have friends.

Show should be starting soon. It’s alarmingly empty in here. I feel bad for the bands.

Then again, it is a Wednesday night. They knew what they were in for.

Finally. Music is starting. This venue always takes forever to get shows going. Don’t they know some of us have places (IE, our home office) to be in the morning?

These openers are... fine. They’re fine.

I’m starting to regret coming all the way into the city for this. Then again, I’m mostly here because I haven’t been to a show in a while. Gotta practice what I preach — even if it means seeing bands I'm only marginally interested in. They can’t all be in my top 10.

And hey, it was free.

This is... OK, time to admit this show is not that great. Fine, but not great.

I want to go home. You know it’s bad when you start counting how many songs a band has played in an effort to deduce how close they are to the end of their set.

Thank god. Second opener is over. Just one more set between me and a pair of pajama pants.

Wow, that man is standing awkwardly close to me. This is the emptiest I have ever seen this club — all this room and he wants to stand right next to me?

Should I say something? I mean, he isn’t really doing anything wrong. He can stand where he wants to. It’s a free country.

Ugh, I hope he doesn’t try to flirt with me. I’m so bad at shutting guys down. I usually have to be an outright bitch because, in my own experience, being anything less than that gives them hope.

Oh good, music is starting. Something to distract me from this guy.

He has a drink in his hand. It looks like... vodka? It’s a clear liquor. He might be drunk. He probably doesn’t realize how close he’s standing. Just be cool, Jody. Jeez, stop being so afraid of drunk people. He’s just having fun. Maybe you should take a page from him and loosen up a little.

He is certainly close enough to touch me.

Maybe I should ask him to move.

... But is it really? Maybe you're just over-thinking this. He probably just brushed up against you in a weird way. Not all men are out to get you, Jody. Calm the fuck down.

…OK, no — he is definitely touching me. No matter how drunk he is, he can’t not notice this.

His hand is moving. What do I do? What do I do? Do I politely ask him to stop? Do I yell at him? Do I wheel around and whack him in the face?

You don’t know what he’s doing, Jody. Calm down. Don’t make a scene. Just stop thinking about it and enjoy the show.

His hand is over my ass now. I should do something. Why am I not doing anything?

Is his hand... clenching?

OK, I am a good three feet away from him now.

Oh god, why did I do that? Why did I react so strongly to what I can’t even confirm was a legitimate incident of sexual harassment?

He was probably drunk. He probably didn’t know what he was doing. I must have just overreacted like I always do. I mean, it’s so dead in here. There’s no way he would have thought he could get away with it.

Also, this is a Colleen Green show. She doesn’t exactly inspire rock ‘n’ roll debauchery. This crowd doesn’t seem like the groping type. I must be imagining things.

... Oh my God, what am I saying? Go be a good feminist and DO SOMETHING ABOUT IT, Jody! Go tell the bartender or something!

Where did he go?

Scanning the room... Actually, I don’t even know what he looked like. I was so focused on not making eye contact that I didn’t get a good look at him. All I know was that he was shorter than me, wearing a white shirt, and holding a glass of clear liquor.

...Or did I? Did I really? I mean, I do have a tendency to freak out and overreact —

SHUT UP, BRAIN. You tell other women all the time that they should never, ever blame themselves for abuse. If you have even the slightest suspicion you got groped, you probably did.

My heart is beating so fast right now. I should do something. I should make a scene. Get him thrown out.

Except that I have no idea who it was.

Well, whatever. Just calm down and try to enjoy the show.

The next day, a reader left a nasty comment on the review I wrote of the show, complaining it didn’t competently cover what happened.

THAT'S BECAUSE I WAS BUSY BEING SEXUALLY HARASSED, YOU ASSHOLE.

He’s not wrong. It’s a pretty bad review. And I’m the only one that knows why.

I should have said something.