How To Explain Maxi Pads To Your Kids (Or Not) 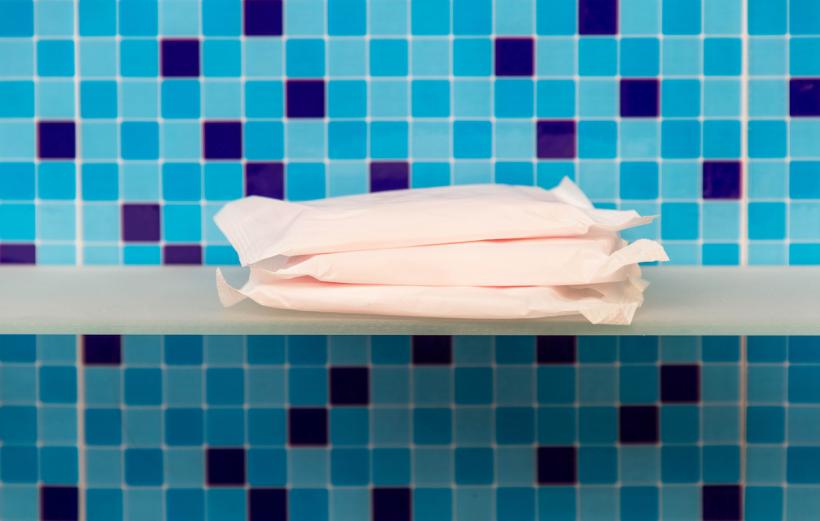 “What are these white surfboards for?” Image: Thinkstock.

It's just the human body. I mean, who cares, right?

My 4-year-old daughter holds up a box of Always pads in the Target aisle.

“What are these for?”

I was checking out FlexFoam technology and Radiant designs where I can get Aztec stripes on my tampon wrappers. But what I really need to know is if there is an overnight pad that doesn't have freaking wings attached to it. I hate wings. These flypaper-level stickiness, rip-the-color-off-your-undies flaps should not be called wings.

They should be called Always Keep Away From Skin.

My daughter is staring at the package diagram that shows pads that go from regular flow to extra-super-overnight-heavy-monster flow.

She looks up at me. “What are these white surfboards for?”

“Mom, tell me.” She says it like I'm the annoying one in this conversation.

“I'll tell you when you're older.”

And then she actually sighs.

This is how your 4-year-old speaks to you when she has two older brothers and one of them is a teenager.

When my teenager was a little boy, I was a single-mom transplanted to a new city with hardly any money and few friends. What this means is that I never had the opportunity to run an errand, or use a public restroom, alone.

One night we were out, and Aunt Flo dropped over to leave your basic bloodbath in my underpants.

I'm the kind of woman who actually wears her last pad to the store to buy new ones.

We dashed into Target. (It's always Target, people), I grabbed supplies and then headed into the bathroom. My son was 3. I had never left him outside of the stall before. We had both been through hell. Like flee-my-raging-ex-during-the-night kind of hell. This was not the type of kid I could leave outside the stall. He would just crawl under anyway.

I pulled him in with me.

I told him it was mommy's time for privacy. “Turn around, honey. Just look at the floor.”

But he was wiggly. Usually he heard my flustered voice raving about germs — “Don't touch anything!” — but this time I was acting differently.

So yes, he saw the blood.

“You know how you grew in my tummy? Well, women's bodies always get ready to grow a baby in their tummy. And if there is no baby to grow, then blood comes out. It happens sometimes. It doesn't hurt at all. I'm OK.”

“OK,” he said and started to touch germy surfaces again. He didn't seem freaked out.

But that was the first and last time I ever discussed my period with him.

My second son is 8, and by the time he was born, I had managed to get some friends and a nice husband. That made the odds of getting trapped in a public restroom alone with him while on my period not-so-high. We made it through the early years without incident.

Then this last summer I was TWB (traveling while bleeding) alone with my two youngest kids. They were both too little to be left alone while I Nascar pit-stopped my period in the bathroom. My first idea was to make both of them stand just outside the stall door. But my son was completely weirded-out by all the looks he got when I dragged him into the women's restroom with me.

It was so easy, people. All I had to do was ask both of them to wash their hands (i.e. engage in water play), and they could not have cared less what mommy was up to on the toilet.

No need for an intense convo.

But now here’s my daughter demanding info on these weird surfboards that came in squishy packages.

I throw some FlexFoams, Radiant tampons, and a box of super-heavy river-of-blood pads into my basket.

I do not answer my daughter's question.

And yes, since I'm the kind of woman who actually wears her last pad to the store to buy new ones, I have to stop in the bathroom on the way out.

“Let's go in the family restroom!” yelled my daughter.

“Oh no,” I tell her. “I'll go in the stall, and you just wait outside and wash your hands.”

There is no better suggestion to a child than “sink play.”

I could give her the rundown like the night I told my oldest son. He wasn't traumatized. It's just the human body. I mean, who cares, right?

Wrong. Maybe my daughter can handle it, but I can't.

If you like this article, please share it! Your clicks keep us alive!
Tags
periods
Kids
explain
how to
parenting