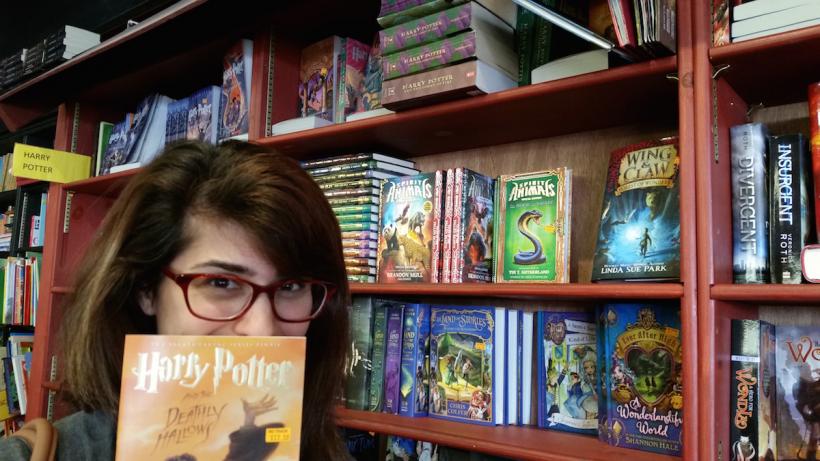 Harry and I are part of an exclusive club: Those under 30 who have experienced death.

You cannot imagine the relief I felt when I walked into that room and she was still breathing.

I hadn’t missed it, thank god.

I walked over to the window and opened the blinds.

The nurses had said yesterday — just after they told us they could either put her on more medication that would slow the breakdown of her internal organs but put her in immense pain, or just “make her comfortable” — that she might still be able to hear.

I sat down in a plastic chair with a book, but I couldn’t concentrate, so I flicked on the old tube TV, which was on a big arm so it could swing across the room to the bed. It was a Saturday morning. All cartoons and news. I eventually settled on American Pickers at a low volume. My dad showed up shortly after, nodded solemnly at me, then walked over to whisper some words to my sleeping mother. He sat down, got out his crossword puzzle, and got to work.

I had finally started to sink into American Pickers when the silence behind me drew me out of it.

Instinctively, I got up and stood over her bed.

She wasn’t breathing. She had had short lapses in her breathing before, but this was a long, long time to go without a breath. The top half of her face was gray.

“She’s so pale…” I said, without thinking about it.

“I’ll get the nurses,” said my dad before he padded out of the room to the nurses station.

I didn’t know what to do. She still hadn’t drawn another shuddering breath, like she had been doing for the last 16 hours.

So, through tears, I just looked at her and started saying, “I love you. I love you.”

Suddenly, slowly, her tongue began rolling from the back to the front of her mouth.

So far, Deathly Hallows is, to me, about the divide between the living, the dead, and the living who have seen death.

Harry and I are part of an exclusive club: Those under 30 who have experienced death.

And when I say “experienced,” I don’t mean “witnessed.” I mean really, really felt it, all the way through.

He comes into Hogwarts with an inkling of it — the sense that, though he was too young to remember, it affects everything he thinks and touches. He’s the Boy Who Lived, but he feels more like The Boy Whose Parents Died. He’s tried everything to crawl out from under the shadow of that, but Voldemort won’t let him.

He’s not even avenging his parents at this point — he’s avenging his own identity. The right to just be Harry. To finally be able to live a life where that sallow specter doesn’t linger over you while you’re at work, driving a car, doing the dishes, ordering coffee...

You would think the seeing death firsthand would reinforce my scientific beliefs; that there is an all-seeing, steadfast order to life and the universe.

What actually happened is it made me more open to stuff I would have never considered.

That my mom could hear us. That she waited for us.

My friend, who is going to school for physical therapy and has taken classes involving cadavers, once described the insides as feeling and behaving like “wet cardboard.”

I shrieked when I heard this (I was a beer and a half in and the place was loud). “I don’t want to know that!” I said. “I want to know my body is a well-oiled machine.”

But I know it’s not. Even though I have seen it pull through when it really shouldn’t have. My mom survived a car crash that should have crushed her. Her blood sugar once went into the thousands. She was admitted straight to the ICU more times than she was sent to general.

And then one day, a fairly routine bout of illness and malaise lead to my dad and I sitting on folding chairs in a cold hospital room, waiting for her to die.

Rationale tells me death is an orderly process, but watching my mom die — and seeing what Harry has gone through — has told me that death may be a fact, but life is chaos. The universe is chaos.

Once you know how sudden and strange death can be, you’re willing to accept a lot.

It’s hard for me to believe, after all she fought through, that she didn’t at least have some say in her death.

She must have been tired, ready to go. Willed herself toward it.

A few days later, I was thinking about that last second. Her tongue. I tried imitating it in my own mouth.

“Luh. Leh. Ullll…” I said to myself as I performed it. The shape she was drawing made an ‘L’ sound.

And then, suddenly, it struck me.

Oh God, what if she was trying to say “I love you” back?

One of my biggest anxiety triggers — since long before she died; long before I was ever diagnosed with anxiety — has been death.

All this talk of immortality, of conquering death, of the universality and the downright mundanity of it, has made Deathly Hallows a little bit rough for me.

But I’ve soldiered on, hoping that the further I go into it, the more sense it — all of it — will all make. I’m very close to the end now (a hundred pages from it), and I don’t know what I’m going to do when it’s over.

I’ve gotten very attached to these characters (even the ones I hate), but they’ve taught me some things that make me a little better with endings — I’ve never been good with them, period.

Deathly Hallows, and everything leading up to it, has me questioning some long-held beliefs of mine, let me tell you. I used to think there was a certain order; there was a predictability about the universe, but damn that all to hell — nothing’s an exact science. The planets have a regular rotation and our bodies turn food into fuel; this we know.

But every so often, a meteor goes off-course and scares a bunch of people in Russia.

Not everything works perfectly, for better or for worse.

The better? There’s a little room for magic.

I don’t mean magic in the way the books define it. I guess I kind of mean it in the way the Lovegoods feel about the world around them: Question it all.

Having that connection to the mystery of death makes me more open to the possibility of there being a wizarding family living across the street from me, right now. It’s hard to put into words, but I think I kind of get why Harry didn’t freak the eff out when his home started being pelted with letters telling him he had been accepted to magic school.

Once you know how sudden and strange death can be, you’re willing to accept a lot.

Now that I’m a few years removed, I don’t think she was saying “I love you” — it was probably just some weird relaxing of reflexes that happens at the final moment of life. But still.

Favorite Character: Mrs. Weasley (What am I going to do without you once this is over? OH GOD PLEASE DON’T DIE!)

Way I Hope This Ends: Hermione does something really smart and cool to capture the last Horcrux, Ron gets in trouble, and Mrs. Weasley shows up at the last second and is like DON’T FUCK WITH MY KIDS and Crucios the shit out of a Death Eater with no remorse whatsoever. Hagrid does something really brave in order to help Harry that will make me cry and cry and cry, and Harry, alone, finally finds his way to Voldemort and destroys him. Then everyone goes home to take a really long nap.

Harry woke early the next morning, wrapped in a sleeping bag on the drawing room floor. A chink [sic] of sky was visible between the heavy curtains: It was the cool, clear blue of watered ink, somewhere between night and dawn, and everything was quiet except for Ron and Hermione’s slow, deep breathing. Harry glanced over at the dark shapes they made on the floor beside him. Ron had had a fit of gallantry and insisted that Hermione sleep on the cushions from the sofa, so that her silhouette was raised above his. Her arm curved to the floor, her fingers inches from Ron’s. Harry wondered whether they had fallen asleep holding hands. The idea made him feel strangely lonely.