I Entered My Son In A Beauty Pageant. Turns Out They're Just As Bad For Boys As They Are For Girls. 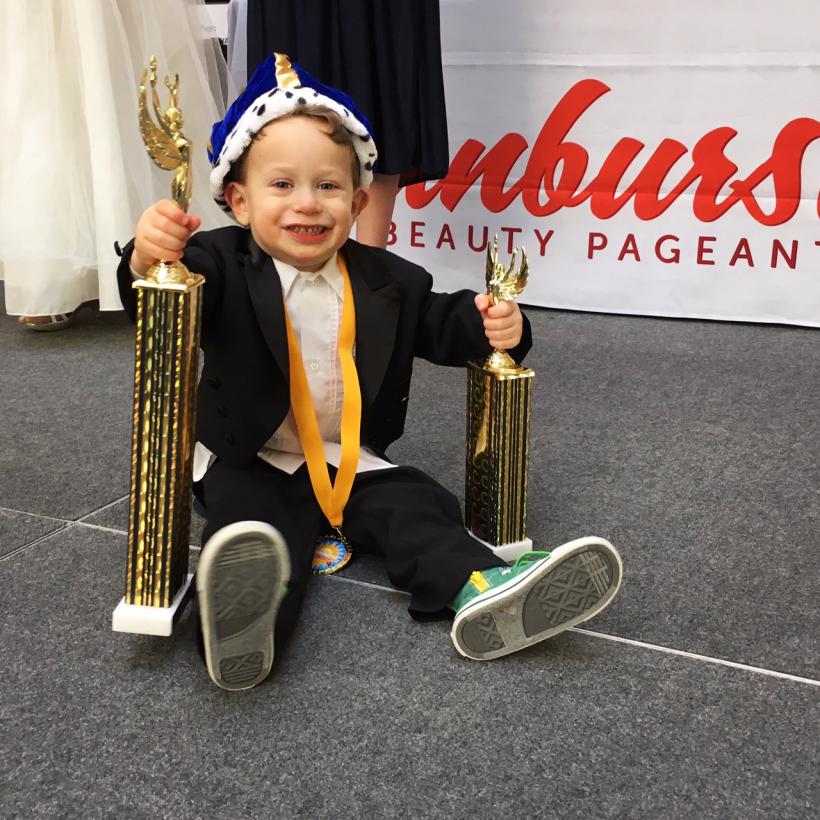 A pageant? In the mall? With a 2-year-old boy? It was a recipe for disaster, hilarity, or both.

I’ve always been intrigued by the drama of pageants. They are a microcosm of how women are treated in society. Stripped of any form of “political correctness,” they offer a glimpse at how girls are expected to perform the artifice of femininity.

Girls pay an exorbitant amount of money just to be oversexualized, objectified, and judged.

And boys? They win just by showing up.

(I suppose a silver lining could be that... it’s fun to see all the sequins and rhinestones?)

JonBenet Ramsey’s murder 20 years ago propelled the world of children’s beauty pageants into Americans’ consciousness. Since then, movies like Drop Dead Gorgeous and Little Miss Sunshine, documentaries like Living Dolls, and the controversial television show Toddlers and Tiaras have filled the public’s need to mock and gawk at these girls. And they’re almost always girls.

The phrase “Go big or go home,” the essence of America, is especially applicable when it comes to beauty pageants. If you don’t spend money on your daughter, she won’t win.

While there are a variety of pageant girls in media representations, there are very few images of boys. That is because there are very few boys who participate in the lifestyle. Of the 100,000 pageants held in the United States each year, I found only four that accept boys as contestants. According to Statistic Brain, over 2.5 million girls enter in pageants each year. No such statistics are available for boys.

But what is expected of boys in beauty pageants? Are they judged based on their ability to perform masculinity? Femininity? Or what?

I was determined to find out. And the local mall was the unlikely place for my education.

Since moving from Brooklyn to the suburbs of New Jersey, my sons have discovered The Mall. Their love for the mall rivals that of any teenager. They run through the open halls, make friends at the play space, and beg for quarters to use the riding toys.

A poster and flyer in the elevator (which we must ride repeatedly) advertised the Sunburst Beauty Pageant— available to both girls and boys. They offered three age divisions for boys. My son Ryan, 2 ½, was eligible to enter the oldest group of boys: those aged 2-3.

My son is a ham. An attention hog. He revels in attention from anyone and everyone; his blue eyes sparkle and his dimples appear. I always wanted to see what the pageant world was really like, especially for boys. My gregarious son was the key.

But, I hesitated. After all, this feminist doesn’t believe in judging anyone on their beauty. And in no way do I think toddlers are equipped to turn on or off their emotions and perform in front of a crowd. But this was my opportunity to see a pageant up close and personal. After all, a pageant? In the mall? With a 2-year-old boy? It was a recipe for disaster, hilarity, or both.

Pageants cost a lot of money for girls — not so much for boys. My cousin loaned me a 12-year-old tuxedo that his son had worn in a wedding. And that was it. Before entering the pageant, I was out zero dollars.

The investment required for girls, as in society as a whole, is considerably higher.

The phrase “Go big or go home,” the essence of America, is especially applicable when it comes to beauty pageants. If you don’t spend money on your daughter, she won’t win. Glitz or High-Glitz pageants encourage or even mandate that little girls emulate brides or royalty. Heavily made-up, they don expensive dresses and costumes, spray tans, manicures, and even falls and flippers.

For the uninitiated: the pageant world, like any sub-culture, has its own language and industry. A fall is a hairpiece, making thin hair appear robust and long. If your child loses a tooth right before a big competition, don’t worry! You can get a flipper — a customized mouthpiece much like a bridge. You can even buy a full row of veneer-like tooth coverings.

And, according to Statistic Brain, 72% of girls hire coaches. Coaches! They learn how to present “pretty hands” and “pretty feet,” how best to smile at the judges, and the proper way to walk across the stage.

None of these are practical or real-life skills — unless. of course, you expect to be judged on your appearance rather than your intellect.

It’s the rare child who actually enjoys being dressed up and paraded in front of strangers. I can’t believe that I, a grumpy pessimist, gave birth to one.

After paying for the primping and preparing, the prices for the pageant itself seem almost reasonable. Most pageants only require contestants to enter the main “beauty” portion of the competition, leaving every other category optional.

For my son’s pageant, the entry fee was $45. However, to qualify for a chance to win superlatives like “Prettiest Eyes,” “Best Hair,” “Best Personality,” and “Best Attire,” I needed to pay an additional $10 per category. If I wanted to enter a photograph for him to compete to be “Most Photogenic,” well, that was an additional $15.

So, while the pageant advertises that it’s only $45, if you enter your child in all the categories, you will end up paying $115. And if you’re serious about pageants, you’ll learn that the “optional” categories aren’t so optional: The scores tallied in the extra categories are added to the entrants’ main scores.

This means that if a child doesn't have those extra numbers, it doesn't matter how well they do in the “beauty part”: They don’t stand a chance to win their age division, let alone the whole pageant.

Last Saturday, the day of the pageant, I didn’t think my son would win. He was crabby and having one of those everything is wrong and nothing is right days. At the mall, he darted past the stage to the candy machines. He even started crying as I pulled him away from a riding toy when the MC called his name.

But he was a natural.

The instant he walked up the steps, his tears were replaced with a giant smile. He waved to everyone, basking in the attention. He twirled and spun and clapped along with the delighted onlookers. It’s the rare child who actually enjoys being dressed up and paraded in front of strangers. I can’t believe that I, a grumpy pessimist, gave birth to one.

Because there was no talent, bathing-suit, or other competitions, the crowning took places immediately after the last child was introduced. The whole thing took less than 30 minutes.

I don’t know if that seemed like enough for the other parents, but as the mother to an antsy toddler, I was thrilled.

All the contestants gathered on stage. The MC grabbed the microphone, ready to make some parents happy and some parents angry.

My toddler danced around the stage, waving and giving high-fives to the other contestants. The reigning queen crowned him with a royal blue plush hat, slipped a medal over his neck, and presented him with two trophies, each about half his height.

I’d like to think my son won his first (and only) beauty pageant because of his sparkling personality, curly mop of hair, bright blue eyes, and adorable tuxedo — but the truth is that he won because he was the only boy in the entire pageant. He won every category I entered him in, regardless of his looks, personality, or actions. He literally won just for showing up.

It was the embodiment of both white and male privilege.

When boys enter pageants, the odds are always in their favor. Boys never compete against girls. While a girl might compete with a dozen contestants in her age division and 70-80 girls in the entire pageant, there are so few boys in the pageant world that they often win just by participating.

Before I entered my son in a beauty pageant, I knew that they promoted negative body image and gendered expectations for girls. What I didn’t realize was that they’re also bad for boys.

Boys don’t need to feel like they are owed something.

The girls battle each other in these pageants, but the boys win, regardless.

And that is the ultimate reflection of our society. 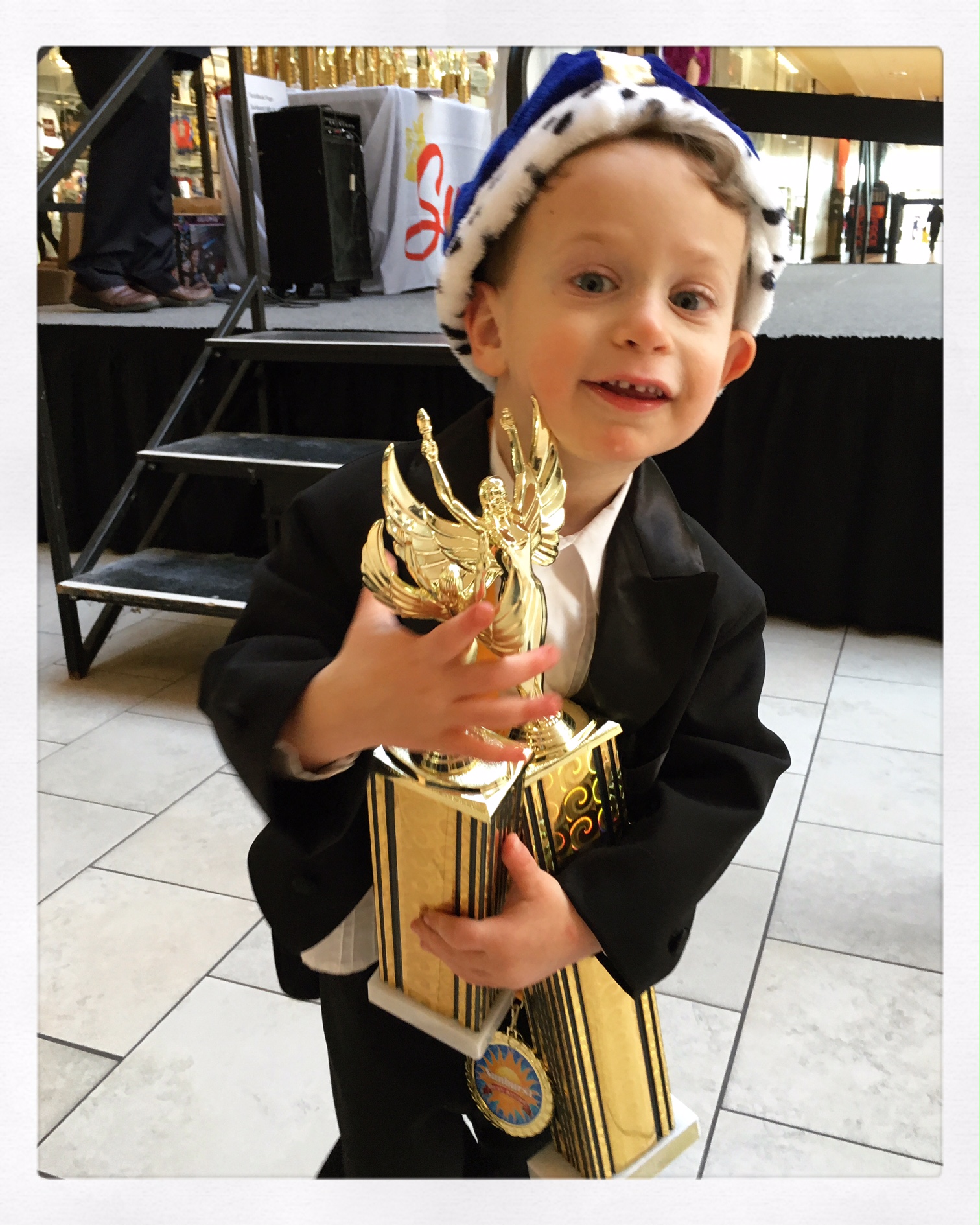