Is Penis Worship At The Root Of The Bogus Notion Of Fetal Personhood? 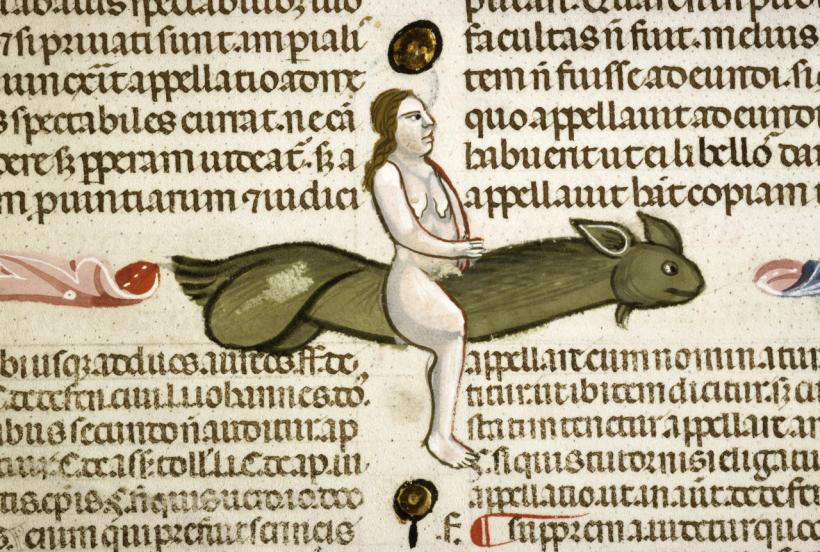 I’m slow sometimes, but after years of writing about abortion rights it finally occurred to me that “life begins at conception” is one more version of a multimillennial infatuation with the penis as symbol and proof that manliness is next to godliness.

On the surface, conservative Evangelical and Catholic insistence that life begins at conception appears to be aimed at elevating the status of fetus over woman. But just beneath the surface, what it elevates is the status of the penis — and anyone who has one. [Editor's note: This article is specifically addressing cisgender men.]

What creates the wonder of a new person? Forget about the maturation of germ cells, and the nine-month labor of a woman’s body, and painstaking parental nurture. It’s a sperm, a penile projectile shot forth by the ultimate organ of demi-divinity. Sperm penetrates egg, and voila! A person! A new soul! All the extraordinary and unique value we accord to human life is created instantaneously.

Once noticed, the pattern is inescapable. Our ancestors thought that the penis was literally divine. Dharmic cultures worshiped it by whacking stalactites and stalagmites out of caves and air-roots off of trees and carving phallic shapes out of granite by the thousands. Abrahamic cultures took the opposite approach and insisted the penis was so precious and powerful that it couldn’t be seen, even in art, and had to be chiseled off of statues, or at least covered with fig leaves.

They also insisted that a man’s magic wand could permanently transform a female from one kind of being to another, from a prized “virgin” into a worthless “whore.” In medieval Catholicism’s recipe for sexual hangups, the prior touch of a penis (or lack thereof) became the most defining aspect of a woman’s identity, economic value and moral virtue. Penis penetrates female, and voila! No longer a whole person! The same magic wand that made her valuable could also do the reverse.

Fundamentalists who are anchored to the Iron Age by sacred texts and patriarchal traditions still hold to this archaic view, though they may use updated terms like “licked lollypop” or “chewed gum” — and some do offer second chances through “born-again virginity.”

The incredible process of making a new person begins long before conception and continues long after.

But at least in the West, millennials finally are catching on to how ridiculous the whole virginity thing is. As one Facebook meme put it recently, “I don’t believe in virginity. Why? Because nobody’s penis is important enough to change any part of my identity.”

No, You Didn’t Build That

Yes, the occasional sperm does end up inside an egg rather than a towel. And yes, sperm-penetrates-egg is a necessary — if insufficient — step in person formation. But the incredible process of making a new person begins long before conception and continues long after. To the trained eye, conception is no more or less magnificent — or critical — than the creation of the egg or the sperm itself, or of the many stages of transformation that come after.

When we [...] choose to incubate a child, which we often do quite gladly, we do so knowing our bodies and lives will never again be the same.

In the subconscious of a patriarchal male [sic] or religious institution intent on preserving privilege, the claim that a penis can create a new person — or better yet, a new soul, almost ex nihilo — may flow naturally and logically from man’s god-like qualities and “rightful” dominance. But from an outside vantage the men making such claims seem rather like puffed-up architects who scribble partial plans and then claim they build buildings. Nice fantasy, but in the real world both buildings and people get made one step at a time. Construction is slow and hard and takes teamwork.

In the case of forming a new person, two bodies produce germ cells that independently hold half of a biological blueprint. If each half works well enough and they meet, then a woman’s body starts the structural engineering to determine whether the design actually works. For very good reasons, the answer usually is no; the engineering team rejects the project and dumps it into the porcelain circular file. Most embryonic humans get booted out so fast that nobody even knows they existed. If and when engineering gives the preliminary go-ahead, a woman’s whole body gears up to start building a person. Her circulatory system pumps up blood flow. Her bones and teeth transfer calcium to the construction site. Her digestive system demands enough food for two.

Not only is the process slow and costly — like any construction project, it’s dangerous. Eight hundred American women die every year from pregnancy. Around the world, it’s that many every day. Most of us survive the project, but we do endure nausea and swollen ankles and fatigue, and irreversible wear and tear. When we women [sic — cis women aren't the only people who give birth] choose to incubate a child, which we often do quite gladly, we do so knowing our bodies and lives will never again be the same.

So, patriarchs, love your orgasms all you like, but don’t fall for the weirdly puffed-up idea that they make babies. Penis power is solely limited to fertilizing eggs. And a fertilized egg is a fertilized egg — no less, no more.

Silly-willy worship aside, many men deserve real credit for making children, because they take on the actual parenthood project in a deep and devoted way. Wanting to be good parents of healthy children, they wear condoms till the time is right, put their lives in order, bring home prenatal vitamins and make peanut butter sandwiches in the middle of the night.

Please call out posers who think themselves endowed with some divine instrument that can turn an egg into a precious little person.

When pregnancy ends, they endure labor vicariously (yes, vicarious pain hurts), anxiously awaiting the slimy little creature that will spill out in a puddle of blood. Labor over, they gingerly hold a sweet-smelling, flannel-wrapped burrito and look into eyes that are seeing the world for the first time and fall in love.

Back in the home they have helped to create, they wipe spit-up off shirts and go to work bleary-eyed when illness strikes and a child can’t sleep. In better times, they get down on the rug and play pretend and read stories even though maybe — just once in a while — they’d rather be playing video games or reading the Times. They understand that making something as wonderfully complex as a fully-fledged, thriving person takes everything a parent can give for decades, and they give it.

Conception worship is willy worship. It diminishes fatherhood by trivializing the many other parts of themselves that men can and do bring to the process of creating a new person — heart and mind, labor and love. And it diminishes all of motherhood.

So, if you’re one of the guys who either is or intends to be a real father — please call out posers who think themselves endowed with some divine instrument that can turn an egg into a precious little person. And if you would, while you’re at it, you could do us women a favor by calling out the equally ludicrous conceit that the touch of a penis turns a female from one kind of being into another. Men don’t have magic wands in their pants — just body parts, and exaggerating the power of your dick just makes you one.