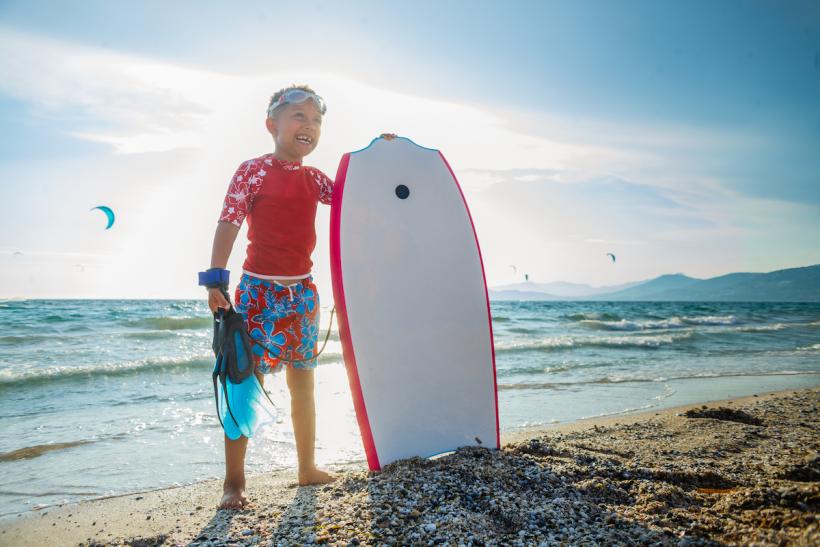 Being skinny or fat or anything in between doesn’t determine whether or not someone should be happy. Image: Thinkstock.

The words we use to describe our kids matter regardless of their gender.

My 5-year-old son approached me again this morning, asking if he was skinny.

His grandparents love to tease him over his “beanpole” body. His pants are never long enough, and we can’t seem to get his belt tight enough on his narrow hips to keep them from falling to his ankles on the playground.

He is skinny, and he hears it all the time from family members, even my husband. Recently he can’t stop obsessing over it, and it comes up time and time again.

It gives me this weird feeling in the pit in my stomach every time he says it. He’s constantly wrestling with this word, the concept, what it means as he grows into his awkward little body. I wish he had never heard the word at all.

I have a long history with the word myself, a discomfort that arises every time I hear it. I don’t like to talk much about skinny shaming, because I know the tremendous privilege I have as a thin white woman. Still, hearing the word reminds me of a time when I would do anything to draw attention away from my size as I struggled with food insecurity, unable to feed myself enough to maintain a healthy weight.

“Skinny” felt like failure. It reminded me that I wasn’t making enough money to thrive. It made me feel undesirable and less than. It wasn’t as bad as being called a “bag of bones” or being told that I ought to eat something, but it never felt good to be called skinny.

It was never a compliment. It was always a judgment.

It has been a long time since I’ve been called skinny, or been shamed for being too thin. But now “skinny” is back, rearing its ugly head. Whispering the same sort of divisive message in my son’s ear that it one spoke to me: You aren’t enough.

He wants to know if it’s “good” to be skinny. Is it OK for a boy to be skinny? Is skinny is better than being fat? Why is it “good” for some people to be skinny but not other people?

Is he always going to be skinny? What is “skinny”?

The answers aren’t as easy as I want them to be.

It would be easy to tell him that skinny is good so that he feels good about his body, but, of course, it’s so much more complicated than that.

I never expected I would have to explain the concept of “skinny” to my son. I thought it was only my daughter whose body image I had to worry about. It turns out I was wrong.

Now I’m realizing the words we use to describe our kids matter regardless of their gender.

We are often so focused on what we say to girls, that we forget the impact our words have on our boys. One flippant mention of my son’s “skinny” figure has turned into a source of unnecessary turmoil for him, and has lead to this difficult-but-important conversation about body image.

It would be easy to tell him that skinny is good so that he feels good about his body, but, of course, it’s so much more complicated than that. He needs to understand that everyone else has their own nuanced insecurities about their bodies, and that he should be sensitive to others. He needs to accept that there are many variations of normal and many variations of good — that there is no “better.”

I wish I had been more prepared for this challenge as I constantly flub while trying to get him to accept not only his body, but everyone else’s.

Because of course it’s OK to be skinny, but it’s also OK if he’s not.

And no, his body isn’t better than anyone else’s, but that doesn’t mean his body isn’t good, excellent even. He can run and jump and climb and do everything he could ever want, but even if he couldn’t, he would never be any less of a person.

He has this certain set of genes, but I don’t know if that means he’ll always be skinny. He is skinny when he’s healthy, but that doesn’t mean everyone has to be skinny to be healthy — and even then, that’s not the point.

I tell him we shouldn’t be concerned about whether someone is skinny or not, because being skinny or fat or anything in between doesn’t determine whether or not someone should be happy.

But that’s a hard sell for a 5 year old. He wants better answers. Answers I haven’t figured out yet.

Except it’s so much more.