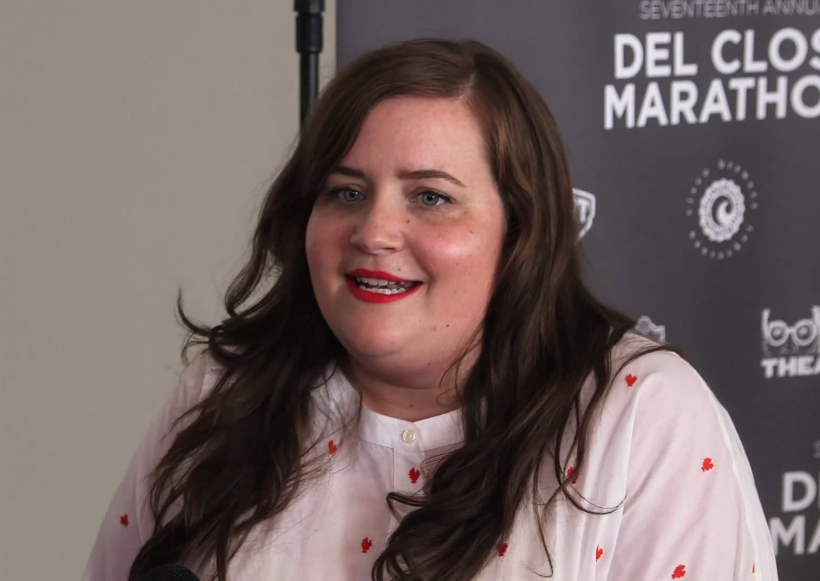 Aidy Bryant by Behind The Velvet Rope TV

We live in a world that is chock full ‘o fatphobia. Some of it is at the hands of random people – the person who screams a slur at you from the car, the busybody at the grocery store who comments on the contents of your cart, or the group of teenagers who moo at you in the mall. Sadly the opportunities that people take to mistreat fat people seem to be frequent and varied. Other fatphobia is systemic and institutionalized – it’s healthcare facilities that don’t have chairs, beds, or even blood pressure cuffs for fat patients, staffed by doctors who can see past their own size bias It’s clothing stores that advertise that they make clothes for “all shapes and sizes” but definitely don’t. It’s airplanes that don’t have seats that accommodate fat people and try to make that fat people’s problem. Sadly, they are often successful, and that’s a bigger problem.

Well, that’s crap. There is a ton of prejudice — racism (including at the hands of the police), xenophobia, homophobia, transphobia, ableism, misogyny, ageism, Islamophobia, anti-Semitism and plenty of other oppressions are far too common to suggest that they aren’t acceptable. What may be more common with sizeism (though it can happen with all types of oppression) is internalization.

This happens when fat people become convinced by fatphobia that fatphobia is correct and our bodies are the problem — that we deserve derision, that we don’t deserve a seat on an airplane or competent, evidence-based medical care. Too often, even if they haven’t actually internalized oppression, fat people who are in the public eye will toe the fatphobia line rather than risk the pushback that they can receive by fighting back against fatphobia.

That’s why Aidy Bryant’s recent interview with The Cut is so refreshing! Aidy is crystal clear that the problem isn’t fat bodies, but rather fatphobia. Starting with her decision to move away from the pursuit of thinness:

She recalls the moment that she stopped focusing on trying to be skinny as “a switch flipping.” “I finally was like, what if I put all of that energy into just trying to like myself and focus on the things I actually want to do as opposed to this thing that’s like a made-up concept? And I’m not kidding, my entire life changed after I did that.

Within two years, I was hired by Second City; two years later I was hired by SNL,” says Bryant. “I stopped letting it be an all-day, everyday thing that defined everything that I did,” she says, snapping her fingers. “And it worked."

You Might Also Like: 4 Ways You Can Be Body Positive Even If You Still Hate Your Body

And she got clear fast on the total unfairness that it the world of plus size fashion:

She recalls an early photo shoot with McKinnon and Cecily Strong, where she ended up having to wear her own jacket and sweater because the magazine didn’t have any good options that fit her. “It was just humiliating,” she says. “The other girls had racks of clothes to chose from and were wearing these thousand-dollar dresses, and I had two sacks or like one matronly mother-of-the-bride dress.

Those were the first times where I was like, Something is different here, and this isn’t fair. This is a fucked-up situation, and it’s purely because of my body. Not because I’m less funny — it’s my body. It’s the only reason that I’m treated differently right now. And it lit a fucking fire in me."

It’s amazing to see a fat woman speaking out about this rather than blaming her body or making excuses for an industry that is absolutely negligent.

In fact, Ms. Bryant is looking to get into the fashion game, she says:

Right now, she and Pearce are in the process of taking patterns custom-fit to Bryant and adapting them for sizes 12 to 24. The plan is to start slow, with one style of dress in a couple of prints. “I’m just trying to get the things that I have access to out there for the masses — like when I wanted something cool to wear to a meeting or an audition or whatever and not just be wearing a black sack,” she says.

Of course, her choice to stop at a 24 is super disappointing, and she could do much better (especially since folks who are a size 12 have tons of options for shopping and those who are a 34 have almost nothing,) but at least she’s actually trying to do something and choosing to take on the roles of role model and activist that she’s been thrust into:

"I didn’t try to get on SNL to be a body-positivity activist, but apparently just being there makes you one. It’s this weird kind of thing where you’re like, I guess I kind of am. It’s literally just not what I came here to do.” Still, Bryant knows how much it matters for young people to see people who look like her in the public eye.

“It sounds so corny now, but representation does fucking matter. And I remember how as a child I was obsessed with Rosie O’Donnell even though that wasn’t exactly what I wanted to do, but I was like, Oh my god, someone who’s a little bit like me on TV."

Representation does matter, and having a talented, unapologetic fat activist on television who is also trying to make the fashion world more size-inclusive is a serious step in the right direction!

If you like this article, please share it! Your clicks keep us alive!
Tags
Aidy Bryant
fat shaming
fatphobia
activism
size-inclusive