I Tried Eating A Ketogenic Diet; Here’s What Happened 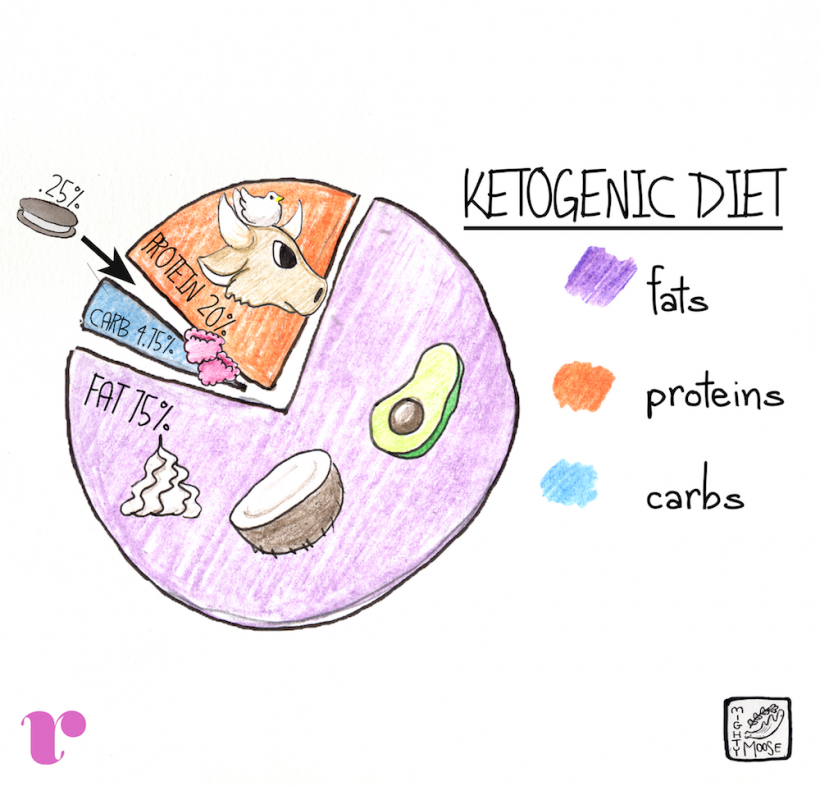 A bipolar, body-positive bread enthusiast with a fucked-up pretty much healed ankle and a history of disordered eating chronicles health, weight-loss, and gardening. No diets calorie restriction allowed.

I Tried A Ketogenic Diet And Here’s What Happened

Just kidding. The sugar craving was real, but not that real.

Let’s review: Keto is a high-fat, moderate protein, low-carb diet. I wrote all about it last week.

To recap the article: Eating keto has had a lot of positive implications for those folks with type 2 diabetes. Insulin resistance has been reversed. Fatty livers have been cured. Folks eating keto often report feeling fewer headaches, more energetic, and better overall.

Last week’s article garnered a fair amount of negative attention, not in small part, because folks see “diet,” and think, “weight-loss program.” It’s true; some folks start eating a keto diet with the primary goal of weight loss. Engaging in a way of eating that limits or excludes any food group (veganism would be a good example), can be triggering to some folks with eating disorders; this is something I kept in mind, as I'm in recovery (and will talk about a bit later).

The possibility that a way of eating might improve my quality of life was enough to compel me to give it a shot. I’m game for an experiment.

Throwback to a few weeks ago. When I arrived home after a week in Portland, I felt like a sorry sack of trash. I can’t even estimate the amount of refined carbs and sugar I ate while I was gone. In the last 24 hours alone, I ate the best almond croissant I've ever had (shoutout to The Hungry Heart bakery), a scone bigger than my hand, some frozen yogurt that was for sure like 90% sugar, and a bowl of coconut rice the size of my head.

I got home Wednesday evening, and when I woke up Thursday morning, I felt like I had a hangover — only instead of the night starting with tequila and ending with me dancing topless, it started with an almond croissant and with me face down in a scone. By Friday, I didn’t even want to look at a carb.

Seemed like a good time to give keto a go.

I didn’t do anything particularly dramatic. I didn’t purge the carbs from the cupboards. I didn’t flush the sugar down the toilet. My teenagers would have wept if I'd tossed the Oreos, so those stayed in the cookie jar. I bought some Swerve and Stevia (to replace the sugar in my coffee). I already had both almond and coconut flour on hand (low-carb and higher nutrient than white flour). We have chickens laying four eggs a day, so breakfast was covered. Everything else I was already eating.

Still, I was surprised to find that there are refined carbs (and carbs in general) everywhere. Folks on a “strict” keto diet usually keep their net carbs to 20-30 a day. (What’s a net carb? Total grams of carbs minus grams of fiber.) I decided to aim closer to 30-ish since my goal was to feel better, not try to heal a sick body.

But that’s when the trouble started.

I started keeping a tally of carbs in my head. Turns out, the calculus you learned 25 years ago is not even remotely helpful when you’re trying to remember how many grams of carbs there are in the kombucha you drank at 10 am (8 grams). When I couldn’t keep the tally in my head [and also realized I don’t know how many carbs are in a carrot (4 grams in a big one)], I reached for My Fitness Pal.

Cue me freaking out because I didn’t know the net grams of carbs in everything I ate.

For me, the slippery slope is always numbers. That’s my OCD talking, and the reason I’m on the highest dose of Zoloft that the FDA says any human should take.. Me using My Fitness Pal has been an absolute NO and a thing I said I’d never do when I started BBA. Since I wasn’t counting calories, I found a tiny loophole. But that loophole allowed OCD me to start to weasel her way in.

So I deleted the app. Real talk. We all have our limitations, needing to control everything is one of mine.

The inability to keep track in my head, plus the inability of me being able to use MFP responsibly, left me a bit stuck. And, truth told, a little panicky. But I pressed on.

By day three, I was feeling pretty gross, and a lot like I’d kill a kitten for a cookie. They call this the “keto flu.” It is often caused by combining drinking a lot of water with not having enough sodium and magnesium. My friend Julie told me to drink pickle juice. The fact that I suddenly loved pickle juice was a pretty clear indicator that I needed some sodium.

This is one of those situations where, if you listen, your body will tell you what it wants. It’s just that while we’ve filled ourselves with Twinkies, we’ve forgotten how to speak that language. Case in point: Pickle juice.

This is the point at which some folks might say, “Wasn’t your body trying to tell you that it wanted carbs?!” 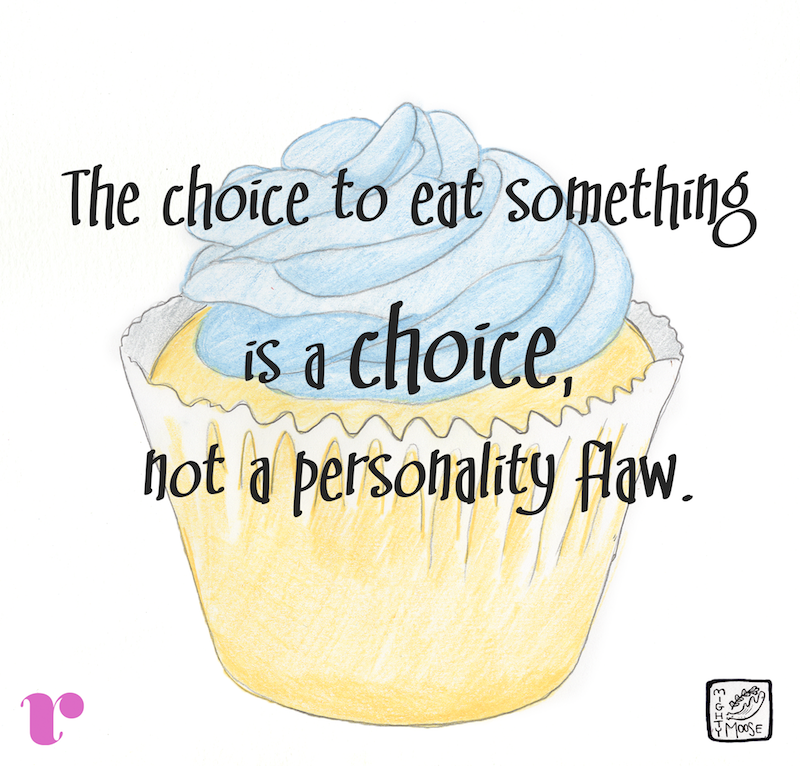 Yeah. It totally was. But in that case, it was lying. Did you know that sugar has the same impact on our brains as LITERAL HEROIN? You can’t trust your brain with an Oreo. Oreos are engineered to make you want them even if they kill you.

Four days in, and I felt great. The “keto flu” was gone.

What was I eating?

Eggs, bacon, avocado. A lot of pepperoni and mozzarella cheese. Hard-boiled eggs, Big green salads with tomatoes, cucumber, shredded carrots, spinach, and romaine. I made a couple of baked goods (muffins, pancakes) with the almond/coconut flour and Swerve, which did not calm the kitten-killer-cookie-craving, but did come pretty close. The family dinners remained unchanged; I just skipped the pasta and rice on my plate (which was a little depressing, because I do love pasta).

Days 6- 8, I was at the beach with a bunch of teenagers at marching band leadership camp. As the only mom, and queen baker, I was spending a lot of time in the kitchen. A big chunk of that time I spent making my famous cinnamon rolls.

This one time, at band camp, I ate a really big cinnamon roll. 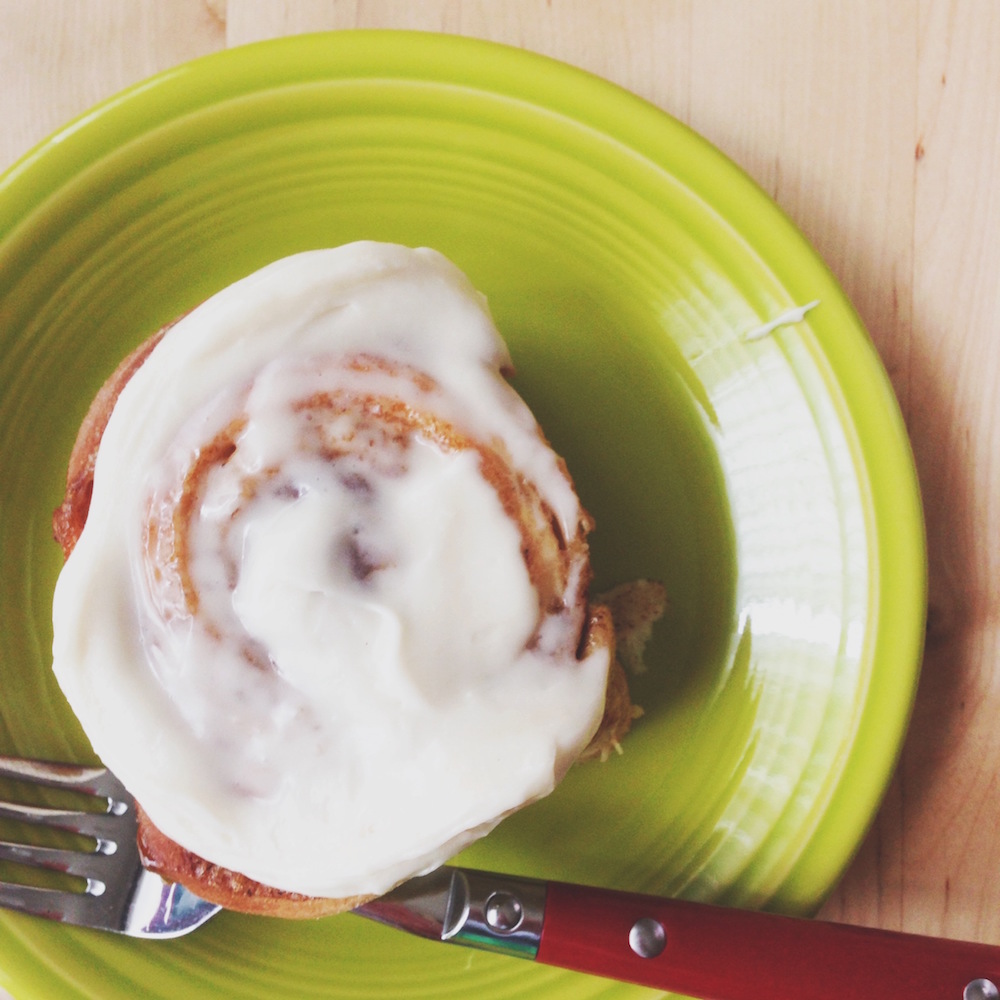 That’s how good these cinnamon rolls are.

I want to establish for you, that this wasn’t a moment of “weakness.” The choice to eat something, is a choice, not a personality flaw.

I had planned to eat eggs for breakfast, right up until I was rolling the dough out at 1 am. It was then, covered in flour and butter, working the dough like I do every Christmas morning, my 17-year-old son and his girlfriend sitting in front of me, that I decided when morning came and I served these rolls up to this great group of kids, that I’d have a cinnamon roll, too.

So that’s what I did.

We were at the beach, so there was clam chowder (in a bread bowl). And then there was the cinnamon roll the next morning. And so on.

And yes, I felt like crap. But the difference between this feeling like crap and the time I felt like crap because I ate three Costco muffins, is awareness. I knew that the cinnamon rolls were full of sugar (so so much sugar) and I knew I’d probably feel like garbage after I ate them. But I ate them anyway because I wanted to.

Once the cinnamon roll was out of my system (and my blood sugar had presumably returned to normal), I went back to limiting carbs. I felt fine. Certainly better than I did on one hundred million grams of sugar. But not that much different.

I spent the next week (the one that is ending as I write this), eating more whole, less refined, but without paying any attention to carbs. I kept the Swerve for my coffee and the Stevia for my tea. I went ahead and had brown rice, but I skipped the bread. I drank kombucha but skipped the sweet tea. I ate fruit because I missed it in my diet. I stuck with the breakfast eggs and avocado because I love feeling full and energetic until lunch time. I noticed that the thing with the biggest impact was a breakfast of protein and fat.

And I’m right back to intuitive eating. Which is right where I started a year ago.

And I feel fine. Dare I say, good?

This might be because my body is operating well with the quantity of carbs I eat. It might be because the real demon for me is sugar. There might be any number of reasons, but the reason I’m not eating keto is simply this: I feel good with my balanced diet as it is. I might find if I ate keto for several months I’d feel amazing. That’s certainly possible, but it’s also possible that it wouldn't matter.

We are all figuring life out as we go — that includes how to love, how to live, and even how to eat. The best life is the one in which we support each other while we figure it out.

If you like this article, please share it! Your clicks keep us alive!
Tags
keto
Ketogenic Diet
ketosis
intuitive eating
diet
eating
wellness
BBA
Beyond Before & After
#DitchTheDiet2017