The Story Behind The Breastfeeding Photo That Pissed Off The Internet 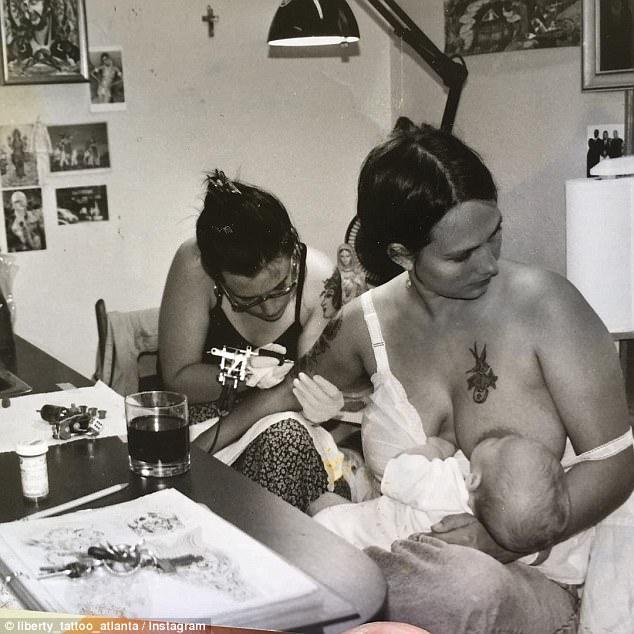 A woman looks down at her baby feeding at her breast. The newborn is clearly her whole world; her loving gaze is headed toward him, making sure he’s comfortable, well-fed and happy.

Her husband, having just bought a new camera to help memorialize the infant’s new life, snapped a photo of his wife and son in this idyllic pose.

The tattoo artist in the background working on the woman’s free arm is so intent upon her art, she doesn’t look up or smile. It’s all part of a day’s work, after all.

The women’s names are Su Mendez and her tattoo artist Kaki Cannon. They are best friends. And last month they became accidentally famous for a photograph taken at Miss Deborah’s Fountain of Youth in St. Augustine more than 20 years ago.

“I was digging through a bunch of photos, and I found it, and I showed my husband,” Cannon said. “He’s our social media guy, and he wanted to put it on Instagram. That’s how the ball got rolling.”

The post got nearly 8,000 likes, a huge haul for the shop which usually gets a couple hundred likes for any one photo. It was soon picked up by Americana Tattoos, which is where it really took off. In fact, the page then put up a screen shot of its original post showing it had nearly a million views. It had gone viral in the tattoo world.

“That’s a real boss!” read one comment after another, as tattoo aficionados admired the multitasking dedication.

When the Daily Mail picked up bits of the story, the tattoo audience extended to the rest of the world, most of whom also gave it a big thumbs up. But not all the attention was positive.

“The reason my husband put it up is that it was back in the 90s, and the internet is filled now with Pinterest-style tattoos. This was real and nostalgic,” Cannon said. “But the internet world focused on the breastfeeding and said that it wasn’t clean. They were really hurtful, actually.”

What is it like being boob shamed and tattoo shamed 20 years after the fact? Su Mendez found herself in a really awkward position, so we here at Ravishly asked her about it.

Q: By now, you’ve seen all the reactions on the internet. Did they surprise you?

A: I’ve never really cared about what people think of me. If you read the comments, 98 percent of the people thought it was awesome, and like 2 percent said the baby would die. But he turned out pretty okay, I think. He’s 21 now.

Q: Why did you decide to get a tattoo while breastfeeding in the first place?

A: Well, we were there, and my husband was getting a tattoo, and I wanted to get one, too. I had a little baby, so what else was I going to do with him? He lived his life in our arms back then; I don’t think he saw a floor until he was two.

Q: Did you get any grief for it back then? When it was happening?

A: No one said anything to me at the time. It didn’t seem strange. I didn’t think that getting a tattoo was going to be something bad for my baby.

Q: But there was still a stigma around public breastfeeding in the 90s.

A: Absolutely. Actually, a month after that picture was taken, we went to a friend’s wedding in D.C., and we went to Tower Records, and Max was hungry so I took him to the classical music section to breastfeed him. While I was doing that, an employee came up to me and told me I couldn’t breastfeed there. My husband wasn’t with me, but I until he came up, and we read the employee the riot act, because there had been a law that breastfeeding in public was legal.

I was never the type of mom to be in a nursing burka. I just whipped my boob out and went for it. It’s not a sexual thing; it’s a function of my body and doing the best I could for my baby.

Q: What’s been your biggest takeaway from this experience?

A: I think it’s really interesting that 20 years later this picture is still an object of fascination. We think we’ve come so far in these politics, that we get to be who we are as women and not explain ourselves or apologize, but we’re still circling around the same issues. It is my body. My child is entitled to the best in this world, and what’s better than the loving embrace of a mother and getting loved and fed?

For her part, Cannon has also stopped reading the comments entirely. She said she’s never really spent much time on the internet, so the reactions have taken her a bit aback.

“I don’t know why these people were chiming in and talking like that,” she said. “Some people got pretty messy about it. Someone said it was child abuse. That it wasn’t clean. But those comments mean nothing to the real-world community because there are so many great, standup, tattooers in this industry. We take the utmost care.”

It’s been years since Cannon worked in St. Augustine. Back in 2002, she and her husband moved to Atlanta and opened their own tattoo shop there. Liberty Tattoo is celebrating its 15th birthday, and business is smashing. Cannon says she probably wouldn’t tattoo a breastfeeding mom these days, but not because of the health risks. There are no health risks currently associated with tattoos and breastfeeding.

“Today if it were a quiet Wednesday afternoon, sure. A busy Saturday, no. We actually discourage children in the shop now. It’s too noisy and hectic,” Cannon said. “Back then, we were just two young kids, and Su is taking care of her baby. That shop was in a small town, and it was a busy day if we did 10 tattoos. At our shop now, we’re doing 40-50, sometimes more.”

While being viral on the internet is only a flash in the pan, the bond shared by these two families has lasted for decades, and the success of that photo is more a testament to that than anything.

“I think it’s cool how Su and I were in the picture, her husband Hal took the picture, and 20 years later, it was my husband who wanted to post it,” Cannon said. “It’s like them as a couple, and then us as a couple were involved in this. All four of us played a part.”

If you like this article, please share it! Your clicks keep us alive!
Tags
breastfeeding
Tattoo
parenting
health rick
dangerous
nursing in public
NIP