Erasing My Father’s Face From Mine 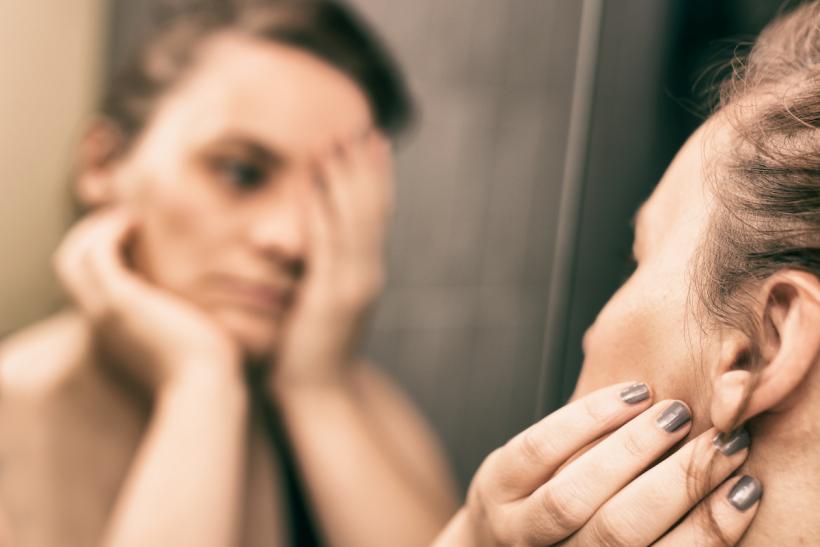 I wanted to reach inside myself and cut it away.

My parents were scientists, realists. They were smart and accomplished — an engineer and a doctor. They were scared to have kids. They knew where they came from and were worried about what kind of parents they would be.

I should have been scared of having kids, but I wasn’t.

I was so optimistic that I had healed from my broken childhood. I had been through years of therapy; I wanted to do everything differently. I just knew I had so much love to give. And frankly, everything was going so well.

So, my husband and I planned to have kids. We gave birth to two wonderful, healthy babies. And, like all children, they could also be challenging and frustrating at times.

We sailed through our daughter’s baby phase without many bumps, our exhaustion overshadowed by our joy. I loved being a mom. I spent long hours watching every move she made, fascinated by her very being.

The trouble began when she became a toddler, followed by the birth of our very cranky son.

I found myself easily frustrated and annoyed. Frustration turned into anger, lit by a short fuse.

I wanted to reach inside myself and cut it away. Remove that default setting from my very existence. I needed to find a way to stop hurting my babies the way that I’d been hurt.

Little things, everything would annoy me. I couldn’t keep it down. I lost my temper, over and over. I felt the strain of it all, the sheer exhaustion of parenting two young kids.

But it was more than that. This anger was reminiscent of something buried deep within me. A piece of my past that I’d buried down so far I didn’t even know it was there anymore.

It terrified me because I couldn’t control it. I’d make promises to myself, that I was going to keep it together and not lose my temper. I swore I wouldn’t yell at her on her birthday. I am sure that I didn’t even make noon before I had lost it yet again.

I began to realize what was happening. I could see my own face when I scolded her.

It was the very mirror of my father’s angry face when he disciplined me. The furrow of his brow, his lips drawn in a tight line of displeasure. His tone and his words that cut through me like a knife. It was an exaggeration of how he really felt — when I look back at it now — as if he felt like he needed to make his response bigger to make sure that it got through to me. And my siblings. We all had to know the severity of our actions, our bad behavior, our mistakes.

Beyond his hardened face, the intensity of his sudden explosion of his anger would shatter me. I felt incredibly scared as I shrunk away from his reactions, fearful of whatever I had done to trigger his wrath. It’s one of the ways my shell protected me, as I pulled way back as far within myself as I could go. I could be physically standing there, but far enough away to insulate myself from his judgment and his anger.

Everything set him off. One step out of line and the hammer would come down. I was cut off at the knees. I was never allowed to explain or defend myself. His ruling had been made.

I should have been scared. But I had forgotten. As I grew up and became an adult, those memories happily faded away, buried deep beneath the surface.

To babies so sweet and soft and innocent. They do what babies do: they push and challenge, break things, spill things, and make mistakes.

I wanted to reach inside myself and cut it away. Remove that default setting from my very existence. I needed to find a way to stop hurting my babies the way that I’d been hurt. No amount of good times and loving times could reverse the damage that this harshness would cause them. I knew that from experience.

I began therapy again. I slowly addressed all those old hurts that parenthood was unearthing in me. I became calmer.

I still have to be aware at the moment. When I feel that rageful reaction come up, I have to stop. Slow down and breathe. I remind myself that they are just children. And they are doing the best they can.

I put my father’s face back where it belongs. In my past, far away from my present.

If you like this article, please share it! Your clicks keep us alive!
Tags
the past
childhood trauma
abuse
parenting
anger management
anger

Warning To New Parents: You May Not Like Every Phase
Sara Mann

What Kind Of Mother Am I?
Sara Mann

Can Alcohol Make You A Better Mom?
Sara Mann