How I Gained F*** Off Status Going Topless In Ibiza 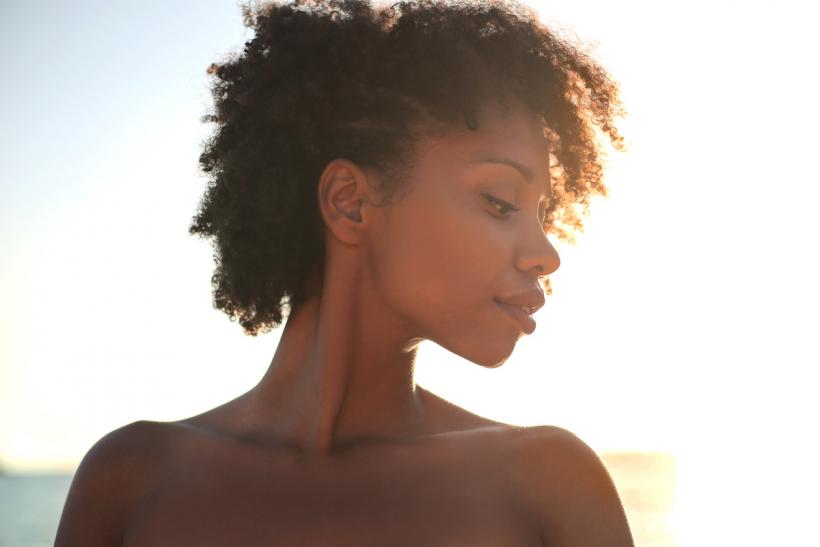 Just like everyone else’s on that beach, my body was just a body.

I, too, pondered those things. I tried desperately to be okay with my body — not even love it, just be able to live without constant anxiety — and failed. Until, miraculously, I stopped giving a shit.

F*** Off Status, which I learned from Australian writer, critic, and comedy badass Catherine Deveny, is gained when a woman is an independent, self-sufficient human who, most importantly, doesn’t take shit from anyone. There are a lot of women out there who have been able to do this, but I never thought I’d be one of them.

Let me tell you about how I decided that I was going to have F*** Off Status about my body, but first, some background.

Like a lot of women, I’ve lived in an overwhelming state of anxiety about my body in general, but it was hatred for my breasts that severely limited my ability to experience life. The idea that others might comment, or worse, mock my body, consumed me.

When I was a tween, I remember wanting to slap my classmates when they told me, “Guys love big boobs. You’re so lucky.” After the annoyance subsided, what remained was seizing, insecure sadness.

This mentality created space for more dangerous self-loathing. By 13, I had developed multiple eating disorders. I eventually recovered, and life continued, but anxieties always lingered somewhere within reach.

Like the time when I was 16, and my family took a trip Italy. We went to the beach, and I finally coaxed myself into taking off my cover up after a half-hour of sitting sweaty and uncomfortable. I removed my dress and laid down on my towel, feeling relieved. A few seconds later, I heard a group of Australians nearby. “Look at ‘er boobs; they’re huuuuuge!” I heard one say. I froze. I heard my heart throbbing in my chest. A few seconds later another one asked, “Do you think they’re fake?”

Immediately assuming they were talking about me, I sprung for my cover-up and pulled it over me. I turned my back against my family so they couldn’t see the tears streaming down my face. I'll never put myself through this again, I thought.

So how did I go from crying over a comment to F*** Off Status?

It happened when I moved to Ibiza, Spain to teach English. In Ibiza (you know, the party island that you hear about in Pitbull songs) there’s a lot of nudity, and the beach is no exception. Topless bathing is an acceptable practice.

I started seeing more uncovered bodies, and therefore more breasts, than I had my entire life. Most of these breasts were so unlike the ones I had seen in movies like American Pie. How could I have guessed there existed breasts of all variety? I grew up in a place with abstinence-only sexual education, where bodies are covered, wrapped up and never discussed. The only ones you see are the occasional R-rated cameos of the ‘right’ kind.

On some level, I sensed there had to exist others like me, people with ‘strange’ breasts, but it felt more like a comforting fantasy than a plausible scenario. If breasts like mine did exist, I certainly never imagined anyone would dare expose them.

We have the innate need to feel a sense of validation that whatever we are or whatever we have is normal. Part of the reason why I despised my breasts was because I felt so abnormal. But I’m not.

Soon, seeing breasts was no longer shocking, and even became so routine, I stopped noticing. It was only a matter of time before their relaxed attitude influenced me.

One day, it happened. I went to the beach with a new Italian friend. We arrived, and she immediately took off her bathing suit top. I couldn’t believe how easily she had just done that. My hands grazed over the fabric of my bathing suit top. I quickly glanced at her’s and my other neighbors’ breasts, and I thought of the unrealistic expectations of normalcy I harbored.

No one there was ashamed of their bodies. No one was hiding anything or allowing whatever type of body they had to take away from the moment they were living.

Everyone looked so carefree, so undeterred by exposing what for me was one of life’s greatest anxieties.

I recalled moments when I let my insecurities drive my actions. There was the dance team, which I quit in part because I never looked right in the costumes. Pool parties I never swam at. And that time I missed out on a day in Italy with my family because I was crying behind sunglasses.

That day, no one was ridiculing others’ bodies or telling them they weren’t allowed there. If I had oddly shaped breasts, did that mean I couldn’t feel the sun or put my toes in the sand? No, it meant I was human, just like anyone else.

I started to feel unbearably hot under the scorching sun and thought about everyone else, naked. Enough, I thought. I unhooked my bathing suit top and watched my breasts flop onto my ribs. I’m not sure if it was the best solution to combat the heat, but it felt like the most therapeutic thing I had ever done. No one even cared if I was naked, as my fears had tried to convince me.

I traced the lines of my areolas and the breast reduction scars wrapping from my armpits to the body of my sternum (no, not even a reduction made me feel better). I used to feel giddy at the thought of slicing off my breasts with a sandwich knife, and now I was naked in public. If that’s not F*** Off Status, I don’t know what is.

We have the innate need to feel a sense of validation that whatever we are or whatever we have is normal. Part of the reason why I despised my breasts was because I felt so abnormal. But I’m not. Because I had never seen nor been around other nude people, I simply hadn’t ever had the opportunity to recognize it.

Just like everyone else’s on that beach, my body was just a body.

I didn’t even have to love it, but I didn’t have to let my fear of it control my life, either.

Just like body positivity isn’t feasible 100% of the time, neither is F*** Off Status. But anytime I feel I’m preventing myself from doing something out of fear of judgment or ridicule of my body, I give myself a pep talk: stop giving a shit.

If you like this article, please share it! Your clicks keep us alive!
Tags
body image
Body Positive
Topless
breasts
beach
ibiza