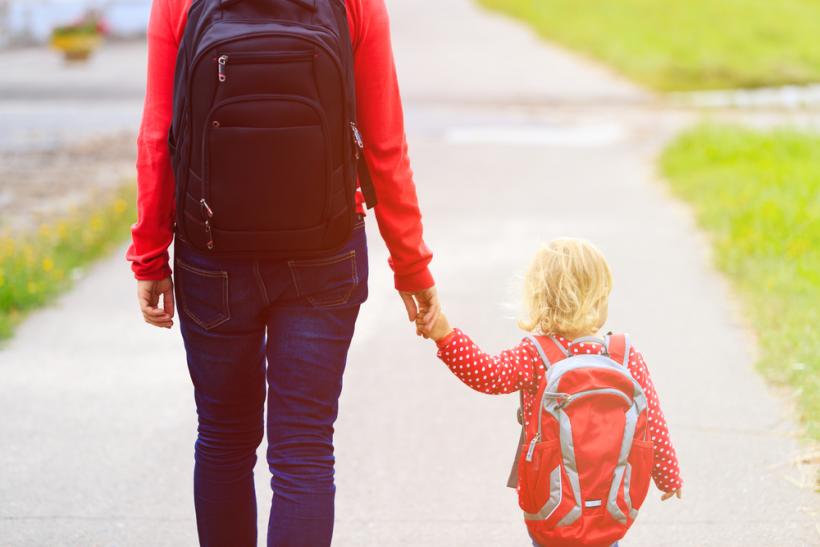 The real reason I’m worried about sending my kids to school is that I’m going to be alone.

Next week, all three of my children will be in school for the first time ever. My son will be in second grade, my daughter in kindergarten, and my youngest in preschool. I’ve been counting down the days, my feelings on a veritable roller coaster as we approach this momentous day. Though it’s an exciting prospect to have some solo time after nearly eight years of full-time at-home parenting, the thought of sending them all off unnerves me as well.

It’s not simply that I’ll worry about them endlessly (which I will) or that I’m daunted by the idea of making three school lunches every morning (I am). It’s not even the gut-wrenching realization that time cannot be frozen or slowed, that I cannot keep them from growing up and away from me. These things are terrible, yes, but they are not the primary source of my anxiety.

The real reason I’m worried about sending my kids to school is that I’m going to be alone.

Now don’t get me wrong, I love my alone time. Traveling alone is among one of the greatest things I have done since becoming a mother. The evenings when my husband takes all three kids grocery shopping while I stay home and read? Sublime. But over the past eight years, alone time has been a rarity, a treat. It has never been part of my steady routine. And to be honest, I am not sure how I am supposed to be alone after all this tethered time.

When I gave birth to my first child I was 22-years-old. I had just graduated college. I was barely more than a year into marriage. I was stumbling into adulthood with a baby in tow, and had no idea what the future held. Yet it didn’t take long for me to start projecting into the future, making plans for “someday, when the kids are all in school.”

There is still a document on my computer listing all the MFA programs I intended on applying to when I thought I was only going to have one child. There’s a list of lofty goals that have been waiting for this moment. Finishing my novel. Pulling in a bigger freelance salary. Earning an advanced degree. Running a marathon. Traveling the world.

I have spent so much time waiting for this day. Planning for it. Setting grandiose goals to make up for the fact that I was graduating college only to have a baby days later. Being an at-home parent was a temporary thing. In many ways it felt like I was pressing the pause button on my “grown-up” life, the one where I would have to figure out what I wanted to do and who I wanted to be.

And now that day of reckoning is finally here. The kids are all in school. I am alone, and it’s time to be the “me” I have spent all these years dreaming about. There is now more pressure than ever to make the most of my time. To pursue my goals with tenacity. To make up for “lost time.”

Yet what I’m realizing now, is that time was not “lost” at all.

Motherhood was not a pause button, and my growth has not been on hold. Scary as it may be to venture into the unknown territory of finally being alone, I am not picking up where I left off all those years ago. I am starting from a place with more knowledge, more assuredness, more bravery than I ever had before.

I am realizing I am not beholden to the dreams and goals I set for myself when I didn’t know who I would grow up to be. I don’t have to strive to be the person I thought I should be. I don’t feel that same strong drive to live up to the expectations of others. If I don’t write my novel, the world will not end. If I don’t make more money, that won’t make me less worthy of love.

These years of intensive motherhood have given me clarity time and again. I know what makes me happy and healthy and secure in a way I didn’t a decade ago. So although being alone is new and a tad bit frightening, I know that I will figure it out. That really, I’ve been figuring out who to be all along.

If you like this article, please share it! Your clicks keep us alive!
Tags
SAHM
WFHM
motherhood
parenting
identity