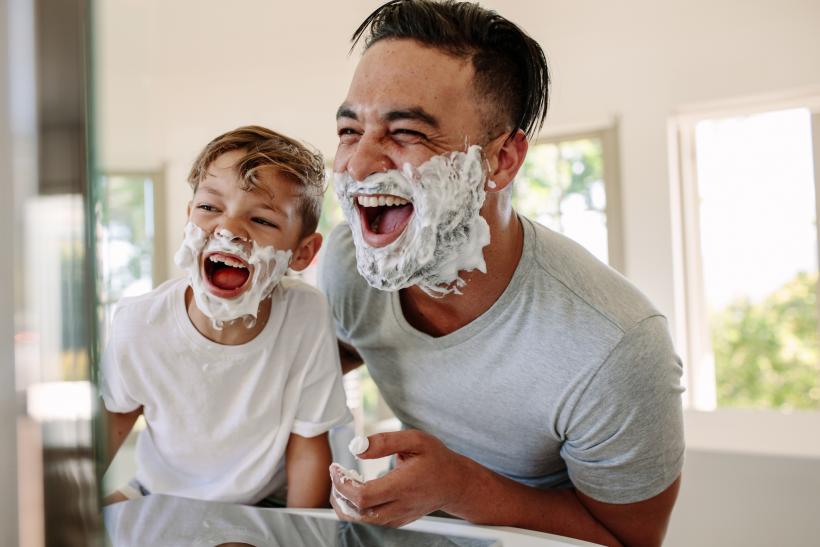 Yes, we should be criticizing these straight, cisgender dads. We’ve been far too easy on them for too long.

There are a lot of challenges when it comes to being a queer parent, from the horror of dealing with bureaucracies built only for heterosexual two-parent households, to having to adopt your own child, to the constant low-level worry that someone will say something queerphobic to our kids. I never want to gloss over these realities, yet despite them, I’ve mostly found being a queer parent to be pretty awesome, and even advantageous in some ways.

I’m generalizing here, but in my experience straight cisgender couples are more likely to be running on assumptions and unspoken “truths.” Queer couples tend to have to talk and negotiate a lot to figure out our roles, whereas, to some regard, straight people have ready-made roles. Throw kids and sleep deprivation in the mix, and if you and your partner both have different assumptions, you are in for a world of surprise and trouble. In general, when my straight friends talk to me about their parenting woes, I find myself saying “how could you not have talked about that beforehand?” one thousand times. This is an issue in general, but there is one question that emerges from this again and again, and it is this...

Should we criticize the parenting of dads?

Specifically, we’re talking about cisgender, heterosexual, fathers, who are partnered and co-parenting with the cisgender, heterosexual, mothers of their children. And I am going to open by being an asshole here. Yes, we should be criticizing these men. What’s more, we’ve been far too easy on them for too long, and while we’ve supposedly gone easy on them in the name of gender equality, it’s straight out of the patriarchy playbook.

Since we live in a patriarchal world, the vast majority of parenting advice is written for mothers. I have consumed vast quantities of parenting writing and advice, and themes begin to emerge over time. Mothers are frustrated that fathers aren’t as involved and just aren’t doing as much of the caretaking as they are, and the advice is to stop micromanaging and let dads find their way. Fathers will want to parent more, we are told, if we let them do it without interfering and criticizing! When mothers are frustrated because they don’t like their husbands’ and boyfriends’ parenting tactics, we’re given the same “loosen up” advice. Dads need to be able to parent in their own way, and if we prevent them from doing so, they might stop changing diapers altogether.

Privately, heterosexual mothers have told me that their spouses regularly let the baby sit in a soiled diaper for too long, don’t take safety risks as seriously, or otherwise are less engaged. They usually follow those statements with something like “eventually I had to learn just to let him do it his way, I mean, just because it isn’t exactly what I would do doesn’t make it wrong.” This is probably true for some things, but the comprehensive way it is applied is undoubtedly a problem, and not only because diaper rash in fact exists.

First of all, there’s the obvious fact that some differences of opinion cannot and should not be let go. Parents of every gender can make mistakes that are potentially dangerous or damaging to a child, and majorly different parenting philosophies need to be discussed and worked out. If you are your spouse disagree on how authoritarian one should be with children, it just doesn’t work to both “do it your own way” and live in frustration.

Another good reason to go ahead and be critical of dads is that despite what we may think, they probably can take it.

In our patriarchal culture, we’ve been taught to believe that the male ego is ridiculously fragile (even though men are supposedly strong, whatever) but all that really does is shut down criticism.

Popular wisdom teaches us that dads are so insecure about their parenting abilities that the only way to build up their confidence is to… never say a word when they mess up. That isn’t true, and pretending it is won’t make any parenting relationship more equal. Men are not fragile flowers who will whither if someone tells them they put a diaper on backward.

The idea of the fragile parenting ego is particularly dangerous because it comes with an implicit (or sometimes explicit) threat. If mothers criticize the fathers of their children, those men will become so wounded they won’t help out with the kids at all anymore, fearing they are too incompetent to do so. But this only works if you start with the notion that mothers parent by default and fathers are just “helping out.” This is ridiculous, and something so many fathers have spoken out against that there are now people speaking out against the speaking out. Additionally, the threat of decreased paternal involvement is just that: a threat. Any co-parent who holds “if you make me feel bad I’ll stop doing the basic work of taking care of our offspring” over your head is no co-parent at all; they’re a leach.

Which brings us to my next point — the double standard of it all. While heterosexual mothers fear what might happen if they are too critical of their partner's parenting efforts, straight dudes have no such hangups. Fathers are constantly telling their partners what they believe they’re doing wrong.

Nothing more clearly exemplified this difference for me than a recent letter in Slate’s parenting column, Care and Feeding. In the letter, a mother writes that her husband is overly strict with their 18-month-old. She shares both that her husband regularly tells her she is “spoiling” their child and that she tries to restrain herself from “editorializing” on her husband’s parenting. Nicole Cliffe responded compassionately and reasonably, but still made sure to say “give him space to parent his own way.” I couldn’t help but think that the husband surely wasn’t wringing his hands over whether or not he had given his wife sufficient space.

When we caution mothers against criticizing fathers, we are harkening back to an older, simpler, uglier, time.

Hell, even the fact that all of this advice is made for the consumption of women reminds us that once upon a time, it was taken for granted that mothers did all or most of the parenting. And do you know what else was taken for granted? That fathers made the final decisions about the children. There’s a robust patriarchal whiff in the air every time a mother is told just to let it go because it used to be required. And while people may believe that allowing fathers to parent as they wish without butting in serves greater equality in parenting, the reality is that it just maintains a pesky power imbalance that is hard to eradicate.

Instead, why not hold cisgender heterosexual fathers to the same (incredibly high) standards we hold every other parent to? It might not be comfortable to have these conversations, but ultimately they could further equality and help everyone to grow as people and as parents (which happens to be very good for the kids too, win-win). That is, it will help unless I am wrong, and fathers really are delicate flowers that will wilt at the slightest criticism.

If you like this article, please share it! Your clicks keep us alive!
Tags
straight
cisgender
dads
parenting
patriarchy