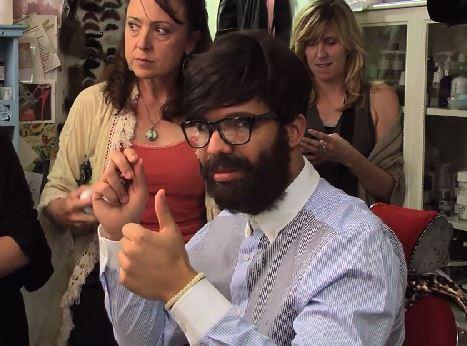 Drake—who will be hosting the ESPY Awards on ESPN this July—took to the streets (donning a totally-convincing beard) for Jimmy Kimmel Live’s ‘Lie Witness News.’ to find out what people really think about him.

And we gotta admit, the guy’s a good sport and can totally laugh at himself (which in our book, makes him pretty appealing and dare-we-say "real.") Sure, he may have been educated at Degrassi, one of The Great White North's finest fake schools, but how much more legit can you get than being an interracial Canadian Jewish rap star?? (Besides Lenny Kravitz, there just aren’t a lot of black Jews in the media to represent!)

To set the record straight, Drake did not pee in a Baby Gap, do T Swift impressions on stage or cry at the end of the awards show. Arguably the best part of the video is after nothing but negative reactions by utterly-fooled pedestrians, the one true Aubrey Drake Graham fan (who also didn’t know the ESPY’s haven’t aired yet) does a straight-up double take when the beard and glasses came off to reveal his true identity. The international star pulled off his Ray-Bans and blamo! Insta-star/viral gold. YOLO, am I right?

Drake, even though you’re not the best at math, you nailed Jimmy Kimmel's literary reference. (And yes, you can come to a Passover seder at my house anytime (but please bring Riri.)