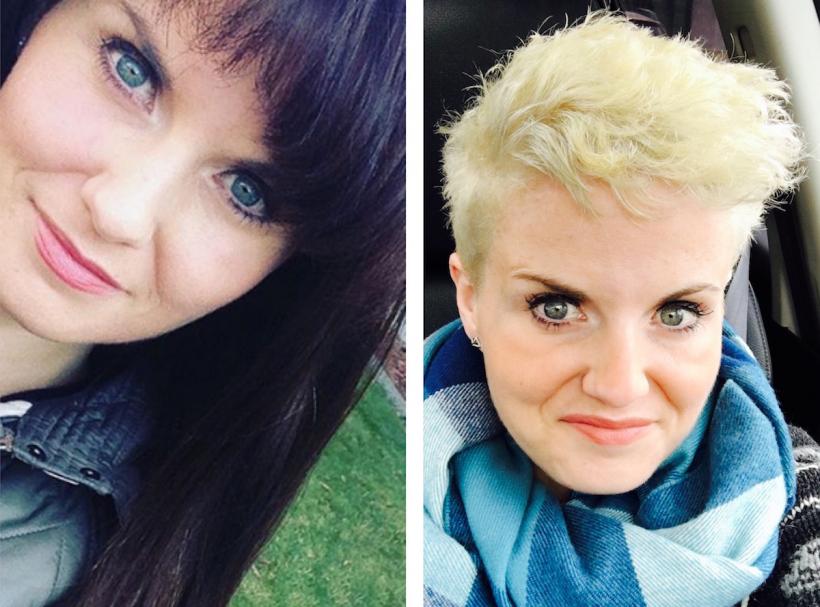 “What is your husband going to think?” IDGAF.

At least once a week, a man tells me that men don’t like short hair.

Until recently, I had long, long hair.

Well, I did and I didn’t. I used to be a news reporter; like virtually everyone else on television, I had medium-length hair which I augmented with extensions made out of someone else’s long, long hair.

Then I quit my job. For the first time in 15 years, I didn’t have to ask for permission to get a haircut, so I chopped it all off. Oh, and I bleached it — from very dark to bright white. This was against the advice of everyone I had asked, all of whom told me to start with something less drastic to make sure I didn’t freak out.

This cautionary caveat was almost always immediately followed by, “What is your husband going to think?”

After surveying my surroundings to determine that, no, I didn’t quit my job and also take a time machine back to colonial times, it occurred to me that getting rid of all my hair wasn’t going to be something I could do without comment. Nearly every day since I’ve cut it, people talk about it. It is a wholly unexpected phenomenon that has taught me a couple of things about the role of my hair in my life — and, apparently, the role of my hair in other’s people’s lives.

At least once a week, a man tells me that men don’t like short hair. Sometimes this is phrased in a lovely, backhanded way: “Normally I don’t like women with short hair, but you look good.” Sometimes it’s straightforwardly insulting: “You would be so pretty... with longer hair.”

Hey, man, I get it. The heart wants what it wants. I'm not offended if short-haired bitches just don't do it for you. In fact, it probably makes a lot of sense, given the whole long-hair-fertility-youth link society advertising perpetuates.

What does bother me is the sheer number of strange men who think it's their God-given duty to inform me that cutting my hair was a huge mistake, because now, they personally could never find me attractive.

As though that particular door being closed will devastate me and make me rethink my style choices.

2. I was actually spending more time on my hair than my health.

Maintaining 24 inches of someone else’s hair affixed to your own scalp is no easy task. Unlike a Kardashian or a Victoria’s Secret model, I didn’t have someone on the payroll to torture my purchased tresses into the perfect beach waves every day. Doing my hair was an hour-long process.

Probably the most startling realization was the amount of free time I had once all that hair was gone. I found myself able to get to yoga class or the gym before work, because of all the time I didn’t need to do my hair.

It served to underscore how few of these activities I was doing before the cut. I had been pouring more time into how I looked than how my body actually functioned: things like exercise or the kind of meal planning that ensures you have a steady supply of fruit and veggies and whole-wheat things.

It was like I had been washing my car everyday but never changing the oil.

3. The whole “you need to be/have X to have short hair” is garbage.

I gave a lot of thought to which particular short hairstyle I wanted. The downside was searching for ideas on the Internet, where all self-esteem-boosting activities go to die. Nearly every “expert” on the subject spent less time offering style ideas than issuing all-knowing edicts on who can and cannot “pull off” short hair.

Hiding, these articles seem to indicate, is what self-respecting women who don’t meet the definition of “perfect” should be doing at all times.

Exercise caution, the experts say, if you’re older — long hair adds youth, and that’s what we should all be striving for. Forever, apparently.

Well, my face is round as a pumpkin and I have no jawline of which to speak. My nose is bumpy from when I broke it as a kid. I’m 40ish, half-past dead to beauty magazines. In other words, short hair is definitely off-limits for me.

“Bah!” said my fearless, awesome stylist Sonya. “The only thing you need to have short hair is a pair of scissors!”

I know it takes a while, but, I mean, it grows back.

People told me I was brave for cutting it. No, people who shave their head in advance of impending chemotherapy are brave — I’m just choosing a new look. I figured if I looked ugly, it would be temporary.

Looking back now, I probably do look better with long hair, but I’ve realized there are more important things to me than being attractive.

If I had a daughter whose attractiveness factored into her top five priorities, my advice would be “Aim higher.” That’s not something to which I’d ever given much thought — until I got rid of my hair.

All that effort is really just a losing battle. Eventually we all have a problem that pretty can't fix. The makeup always washes off. Time wrinkles every face. Chronic illness or a mental health problem doesn't care how pretty you are. Lots of gorgeous folks get divorced.

So we might as well just live in the body that works best for us, and do our best not to force it to look one specific way.

I love everything about my short hair. It’s sassy and edgy — but most of all, it's easy. How it measures up on the scale of relative attractiveness is actually kind of far down on the list of qualities about it that matter to me.

I doubt I will ever grow it long again.