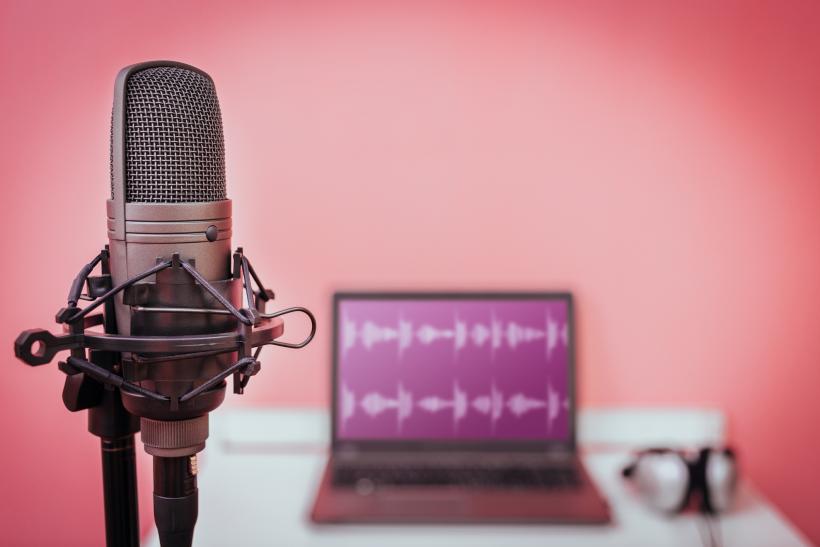 As the fat positive podcast The Fat Lip enters its second year, I wanted to do some reflecting with the creator Ash.

As the fat positive podcast The Fat Lip enters its second year, I wanted to do some reflecting with the creator Ash. She’s used The Fat Lip to talk about hot topics like mixed-size relationships and fat fetishism. She’s also vented about the negative way the entertainment industry depicts fat characters and creating better size inclusivity in fashion. I wanted to dive deeper into these subjects, as well as why "Some Fat Girls Can't And That's Okay".

What is The Fat Lip?

The Fat Lip is a labor of love podcast that I write, produce, host, and edit. I am a podcast nerd, and two years ago I was doing dishes while listening to one of my favorites, thinking about how whenever the subject of fatness is addressed, they get it wrong. I thought, "Someone should make a podcast devoted exclusively to fat people," and then, "Hey, I should!" I didn't know a thing about making a podcast, but I'm naturally curious. What ultimately surfaced was The Fat Lip, which I call a podcast for fat people, about fat people. I got tired of hearing thin people try to tell stories about fat people and getting us wrong. I decided that this podcast would be about fat people telling their own stories. I’ve had some amazing guests who’ve been open, vulnerable, and done just that.

What’s your opinion on fat fetishism?

First, I want to say that every fat person gets to decide whether or not to date or partner with someone who prefers fat people or someone who has a fat fetish. I think there's a distinction between preferring a fat partner and having a fat fetish. I think the two get unfairly conflated. I believe that it's perfectly normal and mundane to prefer a fat partner. Just as it's normal to prefer a tall partner or an older partner. Is it shallow? Sure. In the grand scheme of things, fatness, height, or age have nothing to do with who a person is. Some are more attracted to taller people or to older people or to fat people.

I think ultimately, we’re conditioned to think that fatness isn’t inherently desirable and anyone with a preference for fat bodies must be a fetishist. I reject that. I think there are many reasons that people prefer fat bodied partners, and many people with this preference have felt this way since well before puberty. For many, this preference existed before the concept of sex or sexual urges ever occurred to them.

Speaking only for myself, I don't mind that in a partner. I get to decide what happens in my bed. Sexuality is weird, fascinating, and different for everyone. Like everything sexual, though, we have to set our own boundaries.

I’ve heard of “Lane Bryant Fat.” What are the size distinctions in the fat community?

I credit Roxane Gay for "Lane Bryant Fat." She made that distinction in her interview in This American Life's "Tell Me I'm Fat" episode to make the point that it's easier to be fat positive when you still kind of fit in the world. What she was saying was much more than clothing sizes. She was talking about access for supersize people, the difficulties of physically fitting in spaces, and how race informs all of these experiences.

For me, there are four main categories of a fat person. (I mostly talk about fat people who identify as women or who wear "women's" clothing because that's the space I occupy, but I in no way think that these categories are gender-specific.) Small fats are on the lowest end of the fatness spectrum. For me, anyone who identifies as fat and is a size 18 or smaller is a small fat. Next is what I call "mid-fat," or "Lane Bryant fat," and refers to size 20-26-ish. Lane Bryant also serves 28’s, so it's important to note that none of these ranges are carved in stone. We can all identify however we want.

Traditionally, in the fat positive community, we've referred to any size above a 26 as "superfat." I found myself frustrated, though, that no one in fat pos ever mentions a size beyond 32. It was like once you couldn't wear a 32 anymore, you fell off of a fashion cliff. The dearth of clothing above a size 32 is so severe that those of us who occupy that space often have no idea what our size is because it doesn't exist in 99.99% of retail. If you asked me today what my size is, I couldn't tell you. All I know is that I'm too fat to wear a 32. I thought that this size range deserved its own classification, so I started calling us "infinifats" because we're in the great beyond — past a size 32 — and we don't even really know what our size is. It might as well be size infinity.

I see you're participating in #FatshionFebruary. Did you create a hashtag?

Last year when #FatshionFebruary came around, I jokingly said that I was going to participate so people could see how terribly I dressed because fashionable clothing doesn’t exisit in my size. This year, I decided to actually do it. I created the hashtag #infinifatshionfebruary, and every day I'm posting a photo of the outfit I'm wearing to highlight how underserved sizes above a 32 are.

One week down! You probably know this dress from @torridfashion already but I really like it. I detached the dress underneath so I can wear it with just a bralette and leggings also. The overlay is one of the few non-stretch pieces I can wear from Torrid (or anywhere.) . Please remember us when you are advocating for more plus size offerings. Sizes over 32 exist and we are incredibly underserved! . #infinifatshionfebruary #fatshionfebruary #whatfatgirlsactuallywear #fatandfree #fatactivism

In the caption of every photo I post, I include a plea because it's important for smaller fat allies to use their voices to amplify ours. Those of us on the largest end of the fat spectrum often feel like even fat positivity isn't for us. A lot of us feel like we're too fat for this movement that we (more than anyone, maybe) desperately need.

You recently posted "Some Fat Girls Can't And That's Okay." What inspired this?

I love the #fatgirlscan hashtag. I love the message that we aren't limited by our fat the way the world tends to tell us we are, but I also found myself feeling a little bit of internalized shame because my size does limit me in a lot of ways. I do have impaired mobility, I don't fit in a lot of places, I can't ride a bike, and I felt ashamed of these things. I know that Jes Baker (who created #fatgirlscan) never meant that, and she’d be the first one to tell me that my physical limitations were okay. It occurred to me that there were probably a lot of other fat girls out there who felt some shame about their physical limitations, too. I wanted to stand up and say that not being able to do everything that able-bodied people can is totally okay, it doesn't diminish our shine. It's a process. I still feel shame about the things I can't do sometimes, because fatphobia and ableism run very deep in our culture. But it gets a little better every day.

Listen, I love when fat women declare how powerful and limitless they are, but some fats ARE limited, and they're no less worthy of wonder and amazement and snappy hashtags. Fight ableism from within, family. #fatgirlscan #butiftheycantthatsokaytoo #fatactivism #fatpositivity #effyourbeautystandards #fatacceptance #bodypositive #fatanddisabled

If you could wave a wand and change anything about the fashion and entertainment industries what would they be?

There are many, but these are the two that are in the front of my mind right now:

I would like to see the end of retailers using the phrase "for every body" in their marketing. More often than not, clothing "for every body" does include some plus sizes, but they do not include ALL sizes, which is nearly impossible without a custom sizing option. Those of us who are not included are left feeling erased, like our bodies aren't worthy of inclusion or that people our size shouldn't exist. It's damaging. I would like to stop reading "for all" and then not being included. I'm part of "all" too, and I'm tired of retailers telling me that I'm not.

The other major thing I want to see change is the way fat characters are portrayed in entertainment. I'm tired of only seeing fat women who hate their bodies, who are chronically dieting, and who have no other character traits. When every element in a fat character's story arc is somehow related to their diet, that's a problem. Sure, there are fat people who are trying to lose weight, but they also have lives, jobs, families, love, and a million other stories to tell. It's infuriating that we're given so little, especially when so many fat people are out here writing, creating, and telling real stories! We're out here! We just need people to listen.

If you like this article, please share it! Your clicks keep us alive!
Tags
podcast
fat positive
Body Positive
size 32
The Fat Lip podcast
Ash