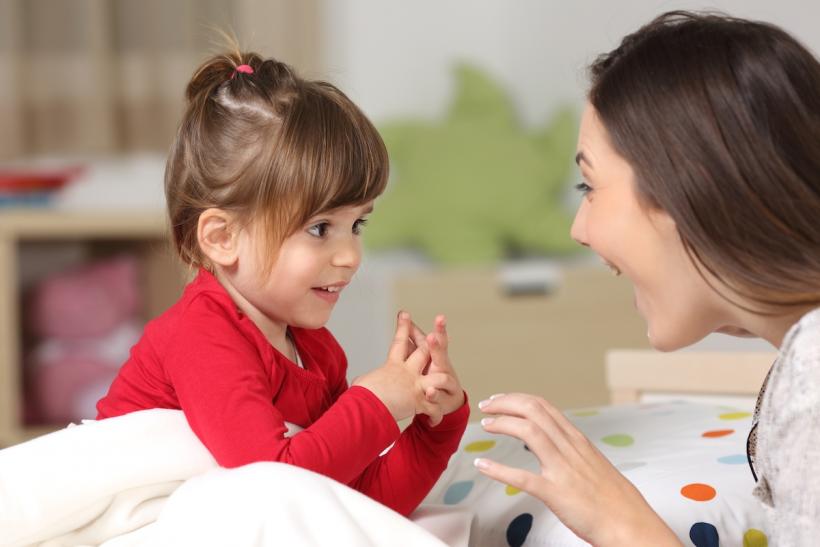 My hope is that by the time she actually starts her period, she’ll be very comfortable expressing her needs.

My daughter is singing. There’s nothing that makes me happier. At two years old, her grasp of pitch and rhythm are rudimentary at best, but what she lacks in technique she makes up for in enthusiasm. She throws her head back and belts for the rafters.

“It’s my period!” she sings, stretching out the last syllable until she runs out of breath. Then she trills it again, this time extending the first syllable: “It’s my peeeeeeeeeeriod!” This is her rendition of “Period Piece” by Lena D, one of her favorite songs.

Is it strange for my toddler to sing about a bodily function she probably won’t experience for another decade?

Maybe a little, but she also likes to sing “Almost There” from Disney’s The Princess and the Frog, even though she’s never opened a restaurant. Music is one of the many ways young children learn about things that will one day affect their lives; I see no reason that shouldn’t include menstruation.

We didn’t talk about periods in my house growing up. My mom gave me the “how babies are made” talk, and explained how to use pads and tampons, but after my first period I kept any news about my cycle to myself. I have no idea when my sister started her period, or when my mother stopped having hers. Tampons were stored under the sink in zippered pouches where no one would risk stumbling upon them unawares.

No one ever had to tell me that discussing menstruation was taboo; I understood from the fact that no one discussed it at all.

During middle school sleepovers, my friends and I sometimes whispered about who had gotten “it” and who hadn’t yet, but that was all. Once we crossed that threshold, we never talked about the material ways it affected our lives.

My daughter is growing up in a different environment — the kind where everything is up for discussion. My partner and I both menstruate, though he was on hiatus for a while thanks to pregnancy and extended breastfeeding, and we’ve never shied away from chatting about our cycles with each other. Any delicacy with which we ever treated the subject dissolved when my partner was trying to get pregnant; you’d be surprised how much there is to say about cervical mucus.

You Might Also Like: To My 13-Year-Old Self: I'm Sorry No One Taught You About Your Period

We didn’t stop talking about menstruation once our daughter was born. I use birth control to limit my periods to once every three months, but I always make sure to let my partner know well in advance when it’s coming, because PMS is like a performance-enhancing drug for my anxiety disorder and people need time to prepare. We try to avoid having too many plans on days when I’m likely to have a menstrual migraine, and we factor my hormonal food cravings into our meal planning (my period loves pineapple pizza). The Saturday of my most recent Shark Week, I made a pancake feast for breakfast, because, as I explained to my daughter, shedding your uterine lining is exhausting and sometimes you need to carb-load. (I topped the pancakes with blackberry jam, which it has only just now occurred to me to find hilarious.)

I’m grateful to have a partner who menstruates and doesn’t mind talking about it. In college, when I dated cis men, I remember going out of my way to hide my used tampons at the very bottom of the trash can where they could never be discovered. I can scarcely imagine how exhausting it would have been to maintain that kind of obfuscation in a lifelong, cohabiting relationship, but I know that’s reality for a non-zero part of the population whose partners are grossed out by the reality of life with a uterus.

I hope my daughter never feels like she has to hide the natural functioning of her body for the comfort of a partner.

I don’t have any particular desire to romanticize menstruation for my children. I don’t have any strong opinions about the sacredness of lunar cycles or the miracle of fertility. I’m not planning to throw a party when my daughter gets her first period, and I certainly won’t congratulate her on “becoming a woman,” since I want her to know that having a uterus doesn’t make someone a woman. I just want her to think of it as a part of life: sometimes funny, sometimes inconvenient, sometimes simply there. One of the worst side effects of stigmatizing menstruation is that it makes people feel ashamed to talk about the things that can go along with it, from cramps to migraines to depression – which means those symptoms often go unrecognized and under-treated. I want my daughter to understand that it’s not embarrassing to have a period, which means it’s not embarrassing to need help with its associated discomforts.

So in our house, we talk about it. My partner and I chat about our cramps and, now that we’ve both switched to reusable menstrual products, we rinse our menstrual cups in the sink. Our daughter offers input on which cloth pads we should wear — she usually votes for dinosaurs — and knows which drawer they go in when putting laundry away. When we’re on the rag, we’re open with her about how we feel, and how we’re coping when we don’t feel great. I’ve never been good at pretending everything is awesome when I actually feel like hell, and children are especially great at noticing subterfuge. So why bother? I just tell my daughter the truth: I have PMS, my back is killing me, and we’re going to eat a lot of chocolate.

My hope is that by the time she actually starts her period, she’ll be very comfortable expressing her needs, whether that’s some extra-strength Advil, a huge plate of nachos, or a dance party to “Crimson Wave.”

Menstruation might be uncomfortable, but there’s no reason it should be mysterious or scary.

If you like this article, please share it! Your clicks keep us alive!
Tags
Period
menstruation
parenting
PMS
tampons